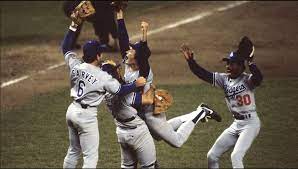 The Los Angeles Dodgers win the World Series, beating the New York Yankees in six games. The Dodgers win the finale 9-2 at Yankee Stadium, as the series is a reversal of the rivals’ previous meeting in 1978, with the Yankees winning the first two games in the Bronx and losing the next four games. George Frazier loses three games in the series, as Dave Winfield gets one hit in 22 at-bats and is nicknamed “Mr. May” by George Steinbrenner. The World Series MVP is split three ways between Ron Cey, Pedro Guerrero, and Steve Yeager in an unprecedented move.