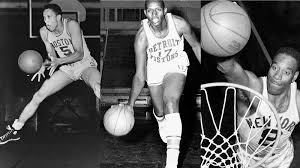 Earl Lloyd makes his NBA debut with the Washington Capitols, becoming the first black player in the NBA. Lloyd scores six points, as the Capitols suffer a 78-70 against the Rochester Royals. The game at Edgerton Park Arena in Rochester. Lloyd, the 100th overall pick in the NBA Draft was one of three African Americans that started the season in the newly integrated NBA. Chuck Cooper made his debut with the Boston Celtics one night later, while Nat “Sweetwater” Clifton made his debut with the New York Knicks four days later.