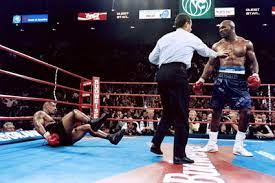 The much-anticipated fight between Mike Tyson and Evander Holyfield turns out to be better than expected, as Holyfield stands toe-to-toe with “the baddest man on the planet” and proves to be the superior fighter. Holyfield controls the fight and scores an 11th round knockout to earn his third Heavyweight Championship reign. Tyson and Holyfield were set to fight in 1990 before Tyson was upset by Buster Douglas. While a 1991 bout was postponed due to Tyson facing rape charges. The two would fight again seven months later with Mike Tyson being disqualified for biting.