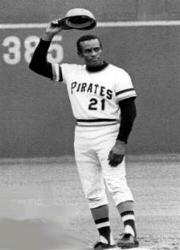 Pittsburgh Pirates All-Star Roberto Clemente is killed at the age of 38 in a plane crash. He was flying in an overloaded plane from his native Puerto Rico to Nicaragua to deliver relief supplies to victims of a recent earthquake. The DC-7 plane was believed to be two tons over the recommended maximum weight. All five passengers were killed when the plane crashed into the Atlantic Ocean a mile off the coast of Puerto Rico, attempting to turn back and making an emergency landing.