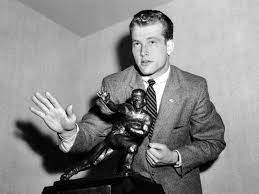 Paul Hornung of Notre Dame wins the Heisman Trophy, becoming the fifth member of the Fighting Irish to win the award given to the best College Football Player in the nation. The vote may be the most controversial in the history of the Heisman, as Notre Dame had a terrible 2-8 season. Paul Hornung is the only player to win the Heisman from a losing team. Johnny Majors of Tennessee finished second in the vote, while Jim Brown of Syracuse was ignored as few voters at the time considered black players. Brown likely was the most deserving candidate with the most yards per carrying in the NCAA.