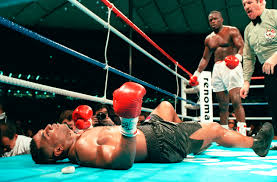 It what could be the most stunning upset in boxing history, Buster Douglas, an unknown heavyweight knocks out Mike Tyson in the tenth round at the Tokyo Dome to win the undisputed heavyweight title. Tyson came into the fight 37-0 with an air of invincibility. Douglas was a 42-1 underdog with a career record of 29-4-1. Mike Tyson protested the fight claiming a long count when Douglas was knocked down in the eighth round but was denied as Douglas claimed the title.