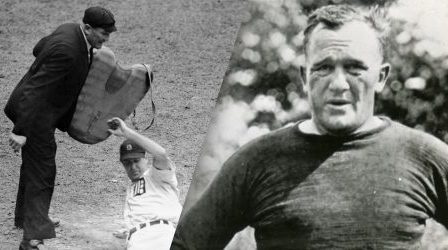 Cal Hubbard becomes the fifth umpire enshrined in baseball’s Hall of Fame when the Veteran’s Committee elects him. Hubbard has served as an American League Umpire from 1936-1951. Before becoming an umpire, Cal Hubbard played in the NFL for ten seasons as a tackle. Spending most of his career with the Green Bay Packers, he was a member of the Pro-Football Hall of Fame’s inaugural class in 1963. To date, he is the only person in both the baseball and football Hall of Fames.