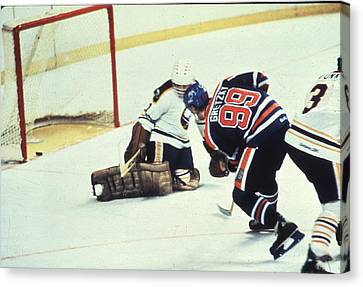 Wayne Gretzky of the Edmonton Oilers sets a new record for goals in his season. He gets his 77th goal of the season to give his team a 4-3 lead over the Buffalo Sabres at the Memorial Auditorium in the third period. The previous record of 76 goals was set by Phil Esposito of the Boston Bruins in 1971. Gretzky would score two more goals for a natural hat trick as the Oilers won 6-3 at the Aud. Wayne Gretzky would finish the season with 92 goals, a record that has not been matched.