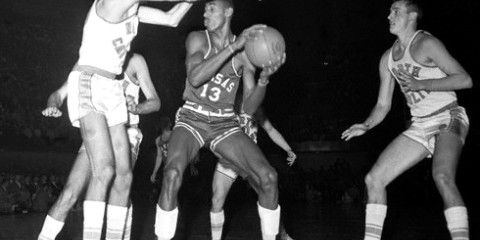 North Carolina wins its first NCAA Basketball Championship, outlasting Kansas 54-53 in a triple-overtime thriller in Kansas City. The Tar Heels, coached by Frank McGuire, finish an unbeaten 32-0 season, while the Jayhawks coached by Dick Harp were seeking their second title. It was the first time the NCAA Championship Game went into overtime as the Tar Heels kept Wilt Chamberlain under control by using stalling tactics with the ball. Joe Quigg won the game with two free throws with six seconds left and deflected a pass at the buzzer that would have given Chamberlain a chance to win the game for Kansas.