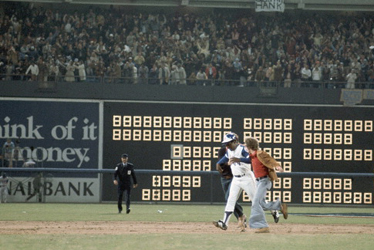 With a two-run home run in the fourth inning, Hank Aaron of the Atlanta Braves becomes baseball’s all-time home run king, passing the record held by Babe Ruth. Aaron’s record-breaking home run off Al Downing of the Los Angeles Dodgers ties the game 3-3 at Fulton County Stadium. Two fans ran onto the field and patted Aaron on his back before he reached home, where all his teammates and his mom and dad were waiting to greet him. Aaron would retire in 1976, hitting 755 home runs.