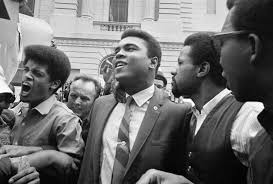 Muhammad Ali gets the most critical unanimous decision of his career as the Supreme Court votes 8-0 to overturn his conviction for refusing to answer the draft into the army. Ali, who was born Cassius Clay, refused to join the military, claiming to be a conscientious objector in 1966. He was later convicted and sentenced to five years in prison, while his boxing license was suspended. The decision by the court vacated the conviction and vindicated Ali.