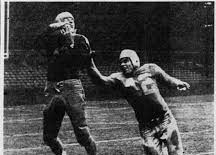 Mama said there would be days like this, and for rookie quarterback Frank Sinkwich of the Detroit Lions is a day to forget as he is intercepted seven times by the Green Bay Packers. It is part of record nine interceptions from eight different players (Charley Brock, Tony Canadeo, Irv Comp, Bob Flowers, Charles Goldenberg, Don Hutson, Joe Laws, and Andy Uram). Hudson had two interceptions as the Packers won the game 27-6 at Detroit’s Briggs Stadium.