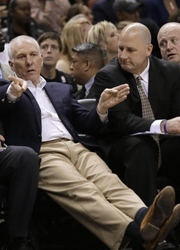 The San Antonio Spurs are a machine that just continues to churn out winning seasons. The core group of Tim Duncan, Manu Ginobili and Tony Parker are all passed their prime and came into the season off a devastating heartbreak in the NBA Finals. Yet they maintained their level of excellence and the man responsible is Gregg Popovich. The regular season was not one of great moments as an entire conference was pathetic, and teams took tanking to a new level, but the Spurs managed to ride it all and post the best record in the NBA at 62-20. The Spurs did this without any players averaging more than 30 minutes a night. Only a genius can do that and for that reason Gregg Popovich should join Don Nelson and Pat Riley in the three-time Coach of the Year club. 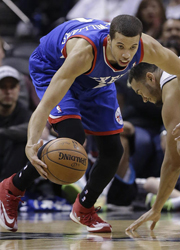 The Philadelphia 76ers may have taken tanking to a new embarrassing level with their 26 game losing streak, but one player who tried every night was Michael Carter-Williams. The 2013 draft was not one of the best in terms of talent, but Michael Carter-Williams, chosen 11th overall from Syracuse, emerged right from the start of the season, scoring 22 points, with 12 assists, seven rebounds and nine steals in the 76ers opening night upset of the Miami Heat. MCW led all rookies in all rookies in scoring (16.7 ppg), rebounding (6.2 rpg) and assists (6.3 apg). The only two other players to achieve that were NBA legends Oscar Robertson and Magic Johnson. If the 76ers can get some talent around Michael Carter-Williams in this year’s draft the days of tanking could be a thing of the past. 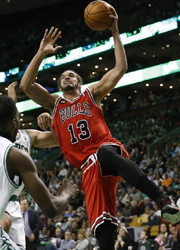 For the second straight season the Chicago Bulls were forced to play without Derrick Rose. However, the Bulls remained one of the top teams in the Eastern Conference, was Joakim Noah emerged as the teams heart and soul as the Bulls were ranked second in the league in defense. Noah has been one of the best defensive players in the NBA for several seasons, but this year he was even better at times carrying the Bulls with his play in the middle. Joakim Noah had career highs with 12.6 points per game and 11.3 rebounds per game, most of which were on the defensive glass. Noah was also a valuable defensive force in the paint as players he defended shot just .467 this season the second lowest percentage in the league at rim. 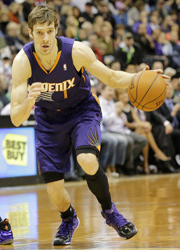 The Phoenix Suns may be the unluckiest team in the NBA as they will be watching the NBA Playoffs, despite posting a 48-34 record. If the Suns were in the Eastern Conference they would be the third seed, instead they are set in the Western Conference, missing the playoffs by one game. Most expected the Suns to win 20 games before the season began but all year they were competitive and a big reason was the sudden emergence of Goran Dragic. Before this season Dragic had been in the league for four years bouncing between the Suns and the Houston Rockets, but upon his return to Phoenix he was finally given a chance to start and excelled averaging 14.7 ppg and 7.4 apg, while shooting 51% from the field, including 41% from three point range. 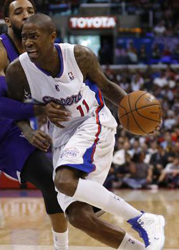 It takes a special personality to be able to come off the bench and be one of his team’s best players. Some players are insulted not to be in the starting lineup and never quite put forth the effort needed to be a key contributor. Nearly every year Jamal Crawford is among the candidates for the NBA’s Sixth Man Award that is because he has always understood his role and how it adds to his value. In his second season with the Clippers, Jamal Crawford had perhaps his finest season averaging 18.6 ppg as the Clippers posted the best season in franchise history at 57-25. Crawford was especially valuable in the fourth quarter as he regularly increased his scoring output and assists when the game was on the line, while becoming one of the league’s most reliable shooters during crunch time. 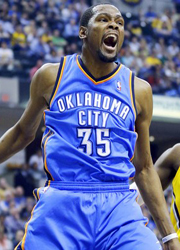 There are only two players worth talking about in the MVP race and they are the best two players in the NBA LeBron James who has won the award four of the last five seasons and Kevin Durant who is seeking his first. LeBron has had better seasons, but with Dwyane Wade’s decline his value has never been higher but this year it Durant’s turn to be MVP. Kevin Durant won his fourth scoring title in five years with a career best 32.0 ppg. Durant also averaged 7.4 rebounds per game, becoming the fourth player in NBA history to average 30-7 over an entire season. The Thunder played most of the season without Russell Westbrook and again were one of the top teams in the NBA with a record of 59-23 just three games behind the Spurs for the best record in the league. However, what makes Kevin Durant the clear choice for MVP was his consistency as he scored at least 25 points in 41 straight games. The day the streak ended was because the Thunder were up big and the Durant rested the entire fourth quarter.

©MMXIV Tank Productions. These are not just mere prediction but whom I believe should win the said awards. Selected by Frank Fleming on April 18, 2014 at 11:05 pm ET