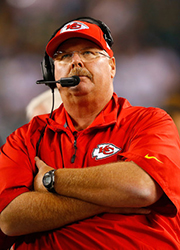 Most teams that start the season 1-5 are dead and buried before Halloween. In fact, since the merger only one team that started 1-5 went to the playoffs before this season. The Chiefs now join the 1970 Bengals as they ended the season with ten straight wins to finish 11-5. The Chiefs 1-5 start included devastating losses and the loss of their top offensive weapon in Running Back Jamaal Charles, making their turnaround all the more remarkable. To make such a comeback from a bad start needs a steady hand leading them and a coach that is among the best in the game. Andy Reid is that man. 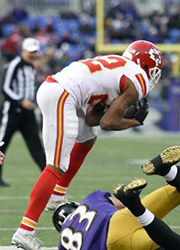 Chosen with the 18th overall pick, Marcus Peters may already be among the best Cornerbacks after his first NFL season. Not only did Peters make the Pro Bowl squad he was among the league leaders in several major defensive categories. His eight interceptions were tied for best in the NFL with Reggie Nelson of the Bengals. Marcus Peters also led the NFL in passes defended with 25, as he had two pick sixes, while collecting 59 tackles, even some of the greatest corners of all time did not have the season Marcus Peters had as a Rookie. 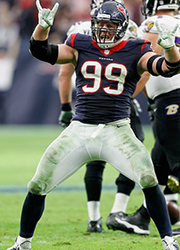 Sometimes when you are the best defensive player in the NFL it is hard to keep up the statistical numbers as teams begin focus on keeping you out of the game. For J.J. Watt that is his weekly struggle as all offensive lines look to stop him above all. However, no defender created more problems for opposing quarterbacks that J.J. Watt as his 14.5 sacks ranked second in the NFL. Watt had a very strong second half getting the Texans into the playoffs despite a rotating carousel of quarterbacks for Houston’s offense. 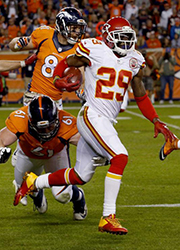 Last year at this time Eric Berry’s football career was only a secondary worry as he was undergoing cancer treatments after being diagnosed with Hodgkin’s lymphoma. Berry was not only able to beat cancer he was able to return to the field in time for the start of the season for the Chiefs. When he returned Eric Berry looked like he never was gone, making it to the Pro Bowl. Eric Berry once again was one of the top safeties in the NFL, with 61 tackles and two interceptions. Berry was able to provide both inspiration and veteran leadership to help the Chiefs make the playoffs. 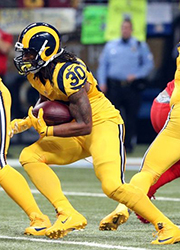 After suffering a torn ACL in his junior season at Georgia, Todd Gurley was considered a risky pick at the tenth spot in the NFL draft. Despite missing the first two weeks of the season, Todd Gurley rewarded the Rams confidence by becoming their most important weapon on offense. In his second career game Gurley led the Rams to a win over the Cardinals with 144 rushing yards in the second half. With 566 yards in his first four NFL starts, Gurley became the most prolific rusher in his first four NFL games since the AFL-NFL merger. Finishing with 1,106 yards and ten touchdowns. 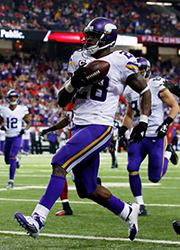 After sitting out most of 2014 after being suspended for allegations of child abuse, Adrian Peterson showed once again he was the driving force for the Minnesota offense. Adrian Peterson became the first player in 11 years to lead the NFL in rushing after turning 30. Peterson also led the league in carries showing despite his age he still had plenty of miles left on his tires. What made Adrian Peterson even more important was his 1,418 rushing yards were key in helping second year QB Teddy Bridgewater guide the Vikings to a division championship. 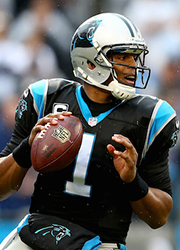 There have been many of the new wave NFL quarterbacks that have struggled to find the balance between running and throwing. However, Cam Newton has found the formula and has learned to avoid making the big mistakes to become the best player in the league. The Panthers came within seven points of a perfect 16-0 regular season as Newton carried the offense all season. The Panthers lost their top receiver before the season even began, but Cam Newton made to work with Ted Ginn Jr. and Greg Olsen becoming his top targets as he passed for 3,837 yards with 35 touchdowns, while running for 636 yards with another ten touchdowns.

These are not just mere prediction but whom I believe should win the said awards. Selected by Frank Fleming on January 4, 2016 at 1:00 am ET