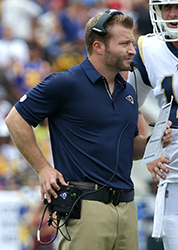 The turnaround of the Rams was one of the stories of 2017 season. Making the playoffs for the first time since 2004 and posting their first winning season since 2003 the Rams posted a record of 11-5 after going 4-12 in 2016. The key to the turnaround was one of the league’s top offense after being one of the worst last year. The dynamic approach of their young coach Sean McVay, from a longtime NFL family, seemed to turn the switch. At the age of 30, McVay was the youngest coach in 80 years to reach ten wins in the NFL. 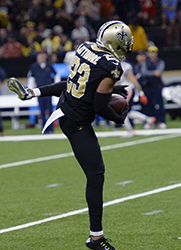 After having one of the worst pass defenses in the NFL in 2016, the New Orleans Saints went out to draft a big need, choosing Marshon Lattimore with the 11th overall pick out of Ohio State. Lattimore was better than the Saints could have even imagined as he helped them become one of the top pass defenses in 2017 on the way to winning the NFC South. Lattimore finished the season with five interceptions while breaking up 18 passes. He also was named Defensive Rookie of the Month twice, including December as the Saints fought off the Panthers. 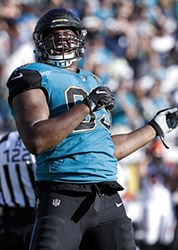 Looking for leadership for a young defense, the Jacksonville Jaguars signed Calais Campbell to a four-year deal worth $60 million. In the Jaguars season opener, Campbell paid dividens right away with four sacks in a road win over the Houston Texans. Campbell finished the season with 14.5 sacks, as the Jaguars made the playoffs for the first time since 2007. Defense was a key to that success as the Jaguars were the NFL’s top unit most of the season, with Calais Campbell being a major factor to that success. 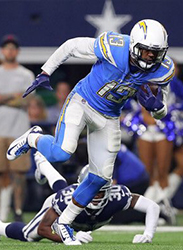 After being limited to nine games total in the last two seasons, Keenan Allen finally was healthy again in 2017 and had his best season as the Chargers after a 0-4 nearly rebounded to make the playoffs. Allen had a career-best 102 catches for a career-high 1,393 receiving yards, scoring six touchdowns. After missing half the 2015 season, Keenan Allen tore his ACL in the season opener in 2016, missing the Chargers final 15 games in San Diego. 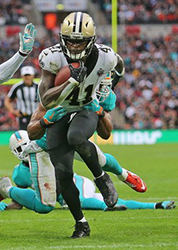 While Lattimore sparked the Saints defensive turnaround, on offense it was Lights, Kamara, Action as their offense was more versatile and dynamic thanks to the addition of Alvin Kamara who was selected in the third round out of Tennessee. Kamara so impressed the Saints coaches early, that their big free agent acquisition Adrian Peterson was quickly traded after being the odd man out, finishing the season with 684 yards and seven touchdowns. Alvin Kamara was the perfect two way running back also proving to be a dangerous pass catcher with 742 yards on 75 catches and five touchdowns. 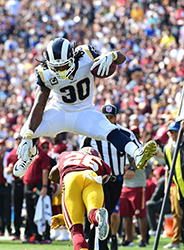 After winning Offensive Rookie of the Year in 2015, Todd Gurley II had a disappointing season as the Rams returned to Los Angeles in 2016. However, with the Rams going from one of the worst offenses to one of the best in 2017 it was Gurley who was a big factor. A double threat back, Todd Gurley had 2,093 yards from scrimmage with a NFL best 19 touchdowns. On the ground alone he was also one of the best rushers in the league with 1,305 yards, with 13 scores. 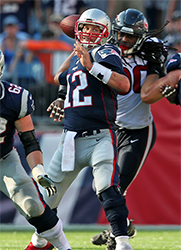 At the age of 40, Tom Brady is still the best quarterback in the NFL, leading the New England Patriots to the best record in the NFL once again at 13-3. The 2017 NFL season was not the greatest of Brady’s career, but after Carson Wentz went down, there is nobody left who can truly be called the NFL’s MVP. Still, the numbers speak for themselves. As Brady goes for his record sixth Super Bowl ring, he passed for an NFL best 4,577 yards with 32 touchdowns and eight interceptions.

These are not just mere prediction but whom I believe should win the said awards. Selected by Frank Fleming on January 4, 2018 at 11:40 pm ET