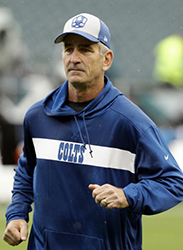 Frank Reich was the last coach hired in the off-season. He was only hired by the Colts after they were left at the altar by Josh McDaniels, who stayed in New England. When the season began, the Colts were considered one of the worst teams in the NFL, as doubts surrounded Reich, who served as offensive coordinator of the Super Bowl Champion Eagles. Those doubts seemed to be confirmed as Indianapolis got off to a 1-5 start. However, Andrew Luck began to find his groove; at the same time, Marlon Mack helped them establish a run game as the defense vastly improved. All along the way, Frank Reich, with a growing beard, provided steady leadership as the Colts head coach. As a result, the Colts turned it around, winning nine of their last ten games and finished 10-6 to become the second team to make the playoffs after a 1-5 start. 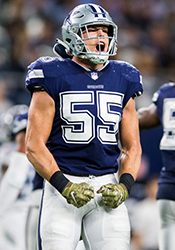 When the Dallas Cowboys were 3-5 with their season on the brink, they needed to change up how they played on both sides of the ball. At the same, time Sean Lee went down with a hamstring injury paving the way for their first-round pick to become a monster in the middle. That monster was Leighton Vander Esch, who became a disruptive force at the middle linebacker position, making plays in the secondary against the pass and stopping the run game. In November, as Dallas was turning their season around, Vander Esch seemed to be in the middle of every defensive play as he was named Defensive Rookie of the Month. Highlighted When the season was over, Vander Esch was the Cowboys’ leading tackler with 102 solo takedowns and assisting on 38 other tackles. 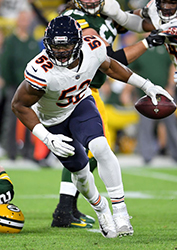 When most people looked at the Chicago Bears when training camp began, they thought they could begin to turn things around after a lackluster 5-11 season. They had a second-year quarterback who was looking to prove he was worthy of their big deal to trade up in the draft and get him, and they had pieces on defense that need a big star to lead them. Just before the season began, Chicago landed that big star when they acquired Khalil Mack from the Raiders, and suddenly, the Bears were Monsters of the Midway again. Mack let his impact be felt right away, as he had a forced fumble and a pick-six in his first game in Green Bay. Mack’s energy helped make the Bears one of the top defensive units in the NFL with 12.5 sacks the most for any Bears defender in 25 years. He also had six forced fumbles and 47 tackles as the Bears posted a record of 12-4. 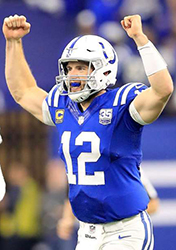 The last three seasons had been a disaster for the Indianapolis Colts and their star quarterback Andrew Luck. Injuries played a significant role in Luck’s schedules as he played just 22 games in that period as the Colts missed the playoffs three straight years. Coming into the 2018 season, Andrew Luck had not thrown a pass in nearly two years, missing the entire 2017 season with a shoulder injury. There were some question marks about Luck’s arm strength and his durability as the season began, especially when he was taken out of games late when a Hail Mary was in order. However, like the Colts turning things around after a 1-5 stary, Andrew Luck again showed he was one of the best quarterbacks in the league, with 39 touchdowns, including eight straight games with at least three TDs a record only topped by Peyton Manning and Tom Brady. 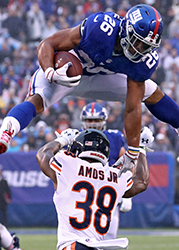 Look out NFL, there is a new running back to electrify the league, and that is Saquon Barkley, who justified his selection as the second overall pick in the NFL draft. Barkley joined elite company becoming just the third back in NFL history (Eric Dickerson and Edgerrin James) to have over 2,000 yards from scrimmage in his rookie season. This was despite playing behind a terrible offensive line in New York. Barkley was the bright spot of an otherwise dim Giants season, as he rushed for 1,307 yards on 261 carries with 11 touchdowns, while collecting 721 yards on 91 receptions and four additional scores. In total, Saquon Barkley touched the ball 352 times and did not put the ball on the ground at any time. Only five other players in NFL history had more touches without a fumble in a season, and none of them were rookies. 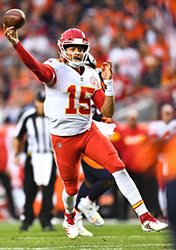 The Kansas City Chiefs were rolling the dice when they made the decision last year to cut ties with Alex Smith, who led them to two straight AFC West Championships. However, they knew what they had in Patrick Mahomes, who they traded up to select with the tenth overall pick in the 2017 draft. It was the first time Kansas City chose a quarterback in the first round since Todd Blackledge in 1983. Mahomes skills were undeniable as he recorded the fastest pass ever clocked in the scouting combines. However, his risk-taking gunslinger mentality made some wonder how successful he could be in the NFL. The answer was nothing short of amazing, as Mahomes made passes with his left hand, sidearm and no-look, and seemed to connect every time, ending the season as just the third quarterback to throw 50 touchdown passes in a single season and he was only 23. 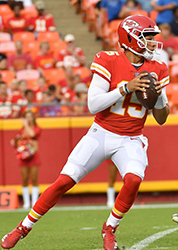 Patrick Mahomes,, at the age of 23, showed the poise of longtime NFL veteran in his first season as a starting quarterback. The type of composure that was no doubt helped by being around professional sports his entire life as his father was a former relief pitcher in MLB. He led the Chiefs to the best record in the AFC at 12-4, while joining legends Peyton Manning and Tom Brady as the only quarterbacks to throw for 50 touchdowns in a season. Mahomes’ skills were well known, as he lit up the radar gun with the fastest pass ever recorded in the scouting combine. However, just how good would he be when he got on the field, as some compared his risk-taking to that of Brett Favre. Patrick Mahomes did more than anyone could have ever imagined as that zip gave him precision accuracy, as he only had 12 interceptions while attempting 580 passes some that were more daring than others.

These are not just mere prediction but whom I believe should win the said awards. Selected by Frank Fleming on January 18, 2019 at 11:40 pm ET