Only once before in the 20 previous editions of this tournament has a host nation failed to advance past the group stage and Russia will become the second. They have no notable players on their squad that could make a difference, unlike the two teams that will progress, and that will hurt them. If Luis Suarez can be on his best behavior and get his name on the scoresheet with Edinson Cavini, Uruguay easily will be the class of what was considered a light group. Their experience of the last two cycles will be a big plus for them as well. The Pharaohs, in their first World Cup since 1990, had to have breathed a big sigh of relief that Mohamad Salah might be available for the final group stage match after his shoulder injury in the Champions League final. His teammates will have to help him out in the first two games to have a chance. 67th ranked Saudi Arabia will leave the tournament empty-handed as their coaching instability and player fitness are issues that will rear their ugly heads.

C’mon, USMNT supporters. You knew there had to be a matchup that would get you excited to watch. The clash between the two Iberian Peninsula neighbors will most definitely be something to watch and enjoy. Spain have reloaded after the disappointment of their last two tournaments and they still have players from their dominance of earlier this decade such as Gerard Pique, David Silva, and Sergio Ramos. We should expect La Roja to breeze to the top of the group. While Portugal are the European champions of 2016, they won that title in very unconvincing fashion and this must be the last ride for Cristiano Ronaldo in the World Cup. Despite this, they will have just enough to claim second over Morocco, who have a terrific defense. That will be offset by an ineffective scoring committee and the firepower of the two teams above them will be too much. As for Iran, they should consider themselves fortunate if they deposit a single goal.

Two decades after lifting their first World Cup on their home turf, France are in a good spot to make a run at a second title. Manager Didier Deschamps was on that squad and he has star striker Paul Pogba of Manchester United, Hugo Lloris of Tottenham Hotspur and N’Golo Kante of Chelsea to propel Les Bleus to maximum points. Not many people seem to be giving Peru a chance. But now that Paolo Guerrero has been reinstated following a drug ban, they can at least be given a shot at pulling off the upset over Denmark and make their first World Cup trip in 36 years a memorable one. Denmark have Christian Eriksen of Tottenham Hotspur and Kasper Schmeichel of 2016 Premier League winners Leicester City to help them, but they will become victims of a very costly shock result against Peru who will edge them for second. Australia can’t seem to catch a break when drawing their opponents in this tournament and they will leave without a whimper.

“Hey, don’t I know you from somewhere before?” should be the theme for two members of this group. Argentina and Nigeria are in the same group for the third time in a row and fifth time in seven World Cups. Lionel Messi, hungry as ever to capture a championship, needs to step up big time to help an Argentina side that underperformed in qualifying but punched their ticket on the last day. Sergio Aguero and Gonzalo Higuain are there with him so that helps. A talented mix of Croatians led by Luka Modric could have enough strength to move into second if they maintain the form from their playoff against Greece. While they may cause some headaches for other sides, Nigeria are too young and inexperienced at this level to make an impact. As we saw two years ago, many years of investment in the development of Icelandic football has come to fruition and the country of just over 337,000 people is now a rising star. But the World Cup is an entirely different animal than the Euros, so we shouldn’t expect to see many Viking Claps this year.

It was very noticeable to everybody when Neymar returned from a foot injury that Brazil have their swagger back and are ready to make some noise at the World Cup. In addition, Gabriel Jesus with seven qualifying goals and Paulinho with six along with Neymar will lead the Selecao on a rampage to the top spot. While another quarterfinal run for Costa Rica might be asking too much, many of their veterans from four years ago return including Keylor Nevas, Kendall Waston, and Bryan Ruiz. So CONCACAF’s second-best team is very capable of another knockout round spot, but they will have to fend off plucky Serbia, who have a chip on their shoulders. Nemanja Matic of Manchester United is their leader and he will do his best, but his side will just barely lose out to the Central Americans. Switzerland got through a difficult qualifying campaign, needing a controversial penalty kick to eliminate Northern Ireland, so it’s tough to see them prepared to go far.

As far as Borrusia Dortmund star Christian Pulisic is concerned (born September 18, 1998), watching Germany reach at least the semifinals is a lifetime tradition. Following a perfect qualifying campaign and with several of their stars from their 2014 title on board such as Thomas Müller and Mezut Özil, this squad could continue to rewrite the history books. With this in mind, they should keep Mexico at arm’s length. Juan Carlos Osorio will leave El Tri’s manager’s spot at the end of the tournament and he will have Javier Hernandez, Giovanni Dos Santos and Carlos Vela to help his team get second. Without the leadership of Zlatan Ibrohimovich, Sweden don’t have much of a legitimate shot to make it out of the group. Tottenham Hotspur goal scorer Son Heung-min is really the only notable player on Korea’s roster so they very much have an uphill battle in the group.

There is perhaps no squad in this tournament more loaded and championship-ready than Belgium. At manager, Roberto Martinez’s disposals are Kevin De Bruyne and Vincent Kompany, who helped Manchester City to the first 100-point season in Premier League history along with Romelu Lukaku and captain Eden Hazard, who captained Chelsea to the title last year. Ranked 3rd in FIFA, nothing will stop Belgium. No team is more eager to open a new chapter in big tournaments than England, and Gareth Southgate’s squad will take a step towards making some amends. With Raheem Sterling, Jamie Vardy and captain Harry Kane leading the way, England should grab second without much of a challenge from underwhelming Tunisia and wildly overmatched Panama. The Africans have a roster that is nowhere near capable of progressing out of the group and the Central Americans are the classic case of a team happy to be here and the country’s national holiday for qualification back in October shows they are satisfied with a participation certificate.

Of the eight groups of this year’s World Cup, this is the most evenly matched. But the winner here should be no question. With Radamel Falcao back on the pitch after missing the 2014 World Cup with a knee injury, James Rodriguez now has someone to help him and Colombia will look to take the next step. Their defense is also going to lift them as plenty of goals will come their way. Senegalese supporters will almost certainly have flashbacks to their stunning quarterfinal run in Korea/Japan 2002. Boss Aliou Cisse was a key member of the team that year. Their key contributors are Liverpool’s Sadio Mane and Napoli top defender Kalidou Koulibaly, and the West African nation could squeak by to the knockout round. Poland will need a big three games from Bayern Munich’s Robert Lewandowski to progress, but it will not be enough as Senegal play more of a team style that will edge them. An aging Japanese side can only hope to play spoilers for the other three, as Leicester City’s Shinji Okazaki and Pachuca’s Keisuke Honda simply don’t have it at this level anymore.

The European champions will be exposed here and Uruguay will ride two goals by Suarez to progress to the next bracket.

Having made it out of their group for the first time since finishing third in 1998, Croatia are immediately thwarted by a French side that is head and shoulders above them as Les Bleus make this one look easy.

The Round of 16 jinx will continue for Mexico here in extra time as deep and talented Brazil will roll onto the next round in this battle of two of the Three Caballeros.

With several champion players on their roster, Belgium easily take care of Senegal to take their first step towards the crown.

Salah simply can’t do it all by himself and as a result, Egypt are severely undermanned against a determined Spanish side who will breeze to the quarterfinals.

Even with Paolo Guerrero, there is little to no hope for Peru against star-studded Argentina as they win going away.

As mentioned earlier, expecting Costa Rica to go on another deep run is too tall a task, but they won’t roll over for Germany as the four-time champs outlast the Ticos in extra time.

History will once again repeat itself as England can’t find a way to negotiate penalty shootouts and Colombia, with James Rodriguez repeating his 2014 heroics, advance.

The French will use a steady defensive game plan to send Uruguay home from the tournament with a dramatic goal 83rd minute by Paul Pogba.

Two heavyweights fighting for a spot in the last four goes by way of the Belgians. De Bruyne will make the difference over Neymar as the Red Devils reach their first semifinal since 1986.

In what could be billed as the match of this round, Argentina pass the shootout with flying colors and knock off Spain to get back to the semifinals.

Germany have an unbeaten record against Colombia in every meeting they’ve played and there should be no reason to expect that to change here.

History is made as Belgium reach the final for the first time ever. The stars of France can only watch in disbelief as two goals from Lekaku and Hazard propel their side to the big show in Moscow.

Probably still shocked at the omission of Leroy Sane prior to the tournament, Germany will settle for a dissatisfying fourth-place finish as Pogba and Kante and equally unhappy France run roughshod on them.

The last three World Cup final matches have been won in extra time, so let’s make it four in a row. Under the bright lights in Moscow, Belgium come out with a first half goal by Romelu Lukaku, only to be answered in the second half by Gonzalo Higuain. The biggest stage in world sports is no bother to the record-breaking Manchester City stars on either team, but it will be Kevin De Bruyne who will make himself a national hero with a 117th minute goal to win the World Cup. Messi stares down the all too familiar feeling of leaving the pitch empty-handed as Belgium, following several years of reloading and retooling, become just the ninth different nation to claim world football’s top prize. 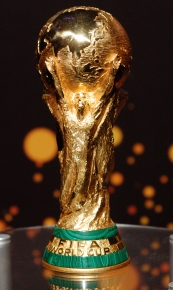