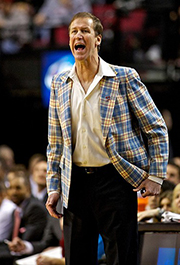 After losing four of five starters from last season, including LaMarcus Aldridge most that the Trail Blazers were a longshot to make the playoffs at best. Instead they were in contention all season and will be taking on the Los Angeles Clippers as the fifth seed, after posting a record of 44-38. Some may consider giving the award to Steve Kerr, after the Warriors won a record 73 games, considering the team was run by Luke Walton for 42 games including their 24-0 start it hardly seems justified. Gregg Ppovich of the Spurs will also get consideration, but the Spurs just do the same thing every year and a vote for stability is not a vote for a standout. In my book Terry Stotts is the real Coach of the Year for just keeping his team together and finding the right roles for a team that by most experts was expected to lose well over 50 games. 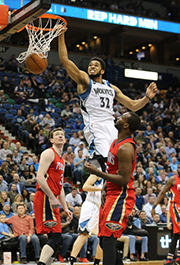 After years of being a doormat in the Western Conference things may be looking up for the Minnesota Timberwolves, who have shown signs late in the season, as they were one of just nine teams to beat the Warriors, doing so in Oakland. One reason for the coming turnaround is two straight Rookie of the Year with Karl-Anthony Towns taken with the number one pick is already on his way to being one of the best centers in the league, after averaging 18.3 points per game, 10.5 rebounds per game and 1.7 blocks per game. Towns also showed some range, shooting 35% from down town. What makes those numbers even more amazing is the fact that Towns is not old enough to drink, just turning 20 a few weeks into the season. In fact looking at his total numbers, Karl-Anthony Towns recorded one of the best rookie seasons ever by a player 20 or younger. 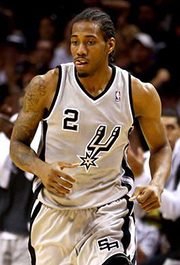 Had it not been for the Warriors the Spurs would have gotten the press for their 40-1 home record and 67-15 overall record, and if not for Stephen Curry Kawhi Leonard would be in line to win the NBA MVP. The Warriors win their games with incredible shooting and offense, the Spurs win on defense and their best defensive player is Kawhi Leonard who should win the Defensive Player of the Year for the second straight season, with more likely to come down the road. The Spurs are the best defensive team in the league, largely because of Kawhi Leonard’s ability to cut down on the opposing teams’ wing players, even shutting down Stephen Curry at one point in the season. Leonard led the league in plus/minus as the Spurs are +9.06 per game when he is on the floor. A true ball hawk, Leonard is great at scooping lose balls, with 6.8 boards and 1.78 steals per game. 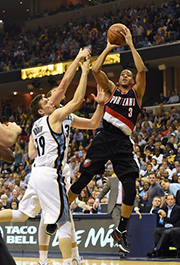 Another key to the Portland Trail Blazers greatly exceeding expectations was the play of C.J. McCollum. After a slow start to his pro career that included a stint in the D-League with the Idaho Stampede, after dealing with a foot injury that ended his college career at Leigh in the Patriot League. C.J. McCollum began to show flashes last season during the playoffs, where he scored 33 points in Game 5 against the strong defense of the Memphis Grizzlies. Given the chance to start after the departure of Nicholas Batum, McCollum shined in the backcourt with Damian Lillard, averaging 20.8 points per game, more than tripling the 6.8 ppg he averaged last season, as he was among the league’s Top 20 scorers. A master ball handler with a long range shot, C.J. McCollum helped the Blazers become a Top 10 offense. 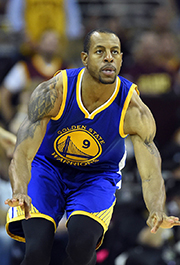 What makes the sixth man so important in the NBA, is the first man off the bench often energizes a team when it is start to get a little winded. A good sixth man is able to create rallies and turn the game around when he hits the court. During the NBA Finals last year Andre Iguodala was just that spark for the Warriors when he got the start in Game 4 of the NBA Finals with his team trailing the Cavaliers 2-1 in the series. Iguodala provided increased energy on both sides of the floor and went on to win the NBA Finals MVP as the Dubs won the final three games. Andre Iguodala has carried that momentum into this season and was a big factor in the Warriors record 73 wins. While his numbers may not be flashy, at just 7.0 points per game, Iguodla’s biggest impact is on defense where he is perhaps Golden State’s best defender. 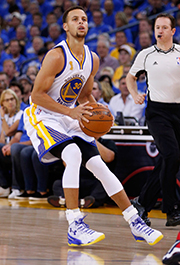 Water is wet, the desert is dry and Stephen Curry is the NBA’s Most Valuable Player. This is the ultimate no brainer, with the Golden State warriors record 73 win season, Curry should not only be the MVP it should be unanimous. The driving factor in the Warriors incredible season of course was Curry who won the NBA’s scoring title with an average 30.1 points per game, a full point more than James Harden, and more than six points per game than last season when he won his first MVP award. What truly made Stephen Curry’s season special was his amazing long range shot, as he averaged five three pointers per game, while shooting 45% from beyond the arch as he nailed a record 402 threes, breaking the record he set last season by 116.It is largely because of Curry’s unprecedented ability to make three point shots that the Warriors had the success that they did this year.

©MMXVI Tank Productions. These are not just mere prediction but whom I believe should win the said awards. Selected by Frank Fleming on April 14, 2016 at 11:15 pm ET