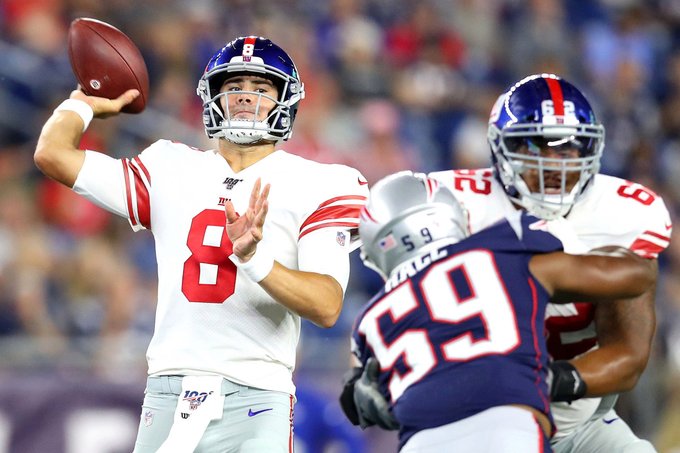 When the New York Giants drafted Daniel Jones with the sixth overall pick in the 2019 NFL Draft, the decision was met with some skepticism. But Jones has started his professional career as well as one could have expected, providing Giants fans with something to believe in going forward. The question now is how the Giants plan on handling Jones’ development, with the smart move being to take things slowly with the rookie quarterback.

Every Daniel Jones Play vs. Bengals | NFL 2019 Highlights
Daniel Jones has played very well in the preseason action that he has been exposed to as he kicks off his NFL career. In the New York Giants’ third preseason game against the Cincinnati Bengals, Jones completed nine of his 11 pass attempts. Those nine completions went for 141 yards, setting up scoring opportunities for the Giants while impressing the typically difficult to impress New York media including the New York Post. And Jones has impressed off the field as well.

For evidence of that, look no further than the way that Jones handled the situation surrounding Baker Mayfield’s comments about where Jones was drafted. Mayfield stated that he was surprised that Jones was drafted as high as he was during the most recent offseason, which was perceived by many to be a shot at Jones by the former number one overall pick by the Cleveland Browns. To Jones’ credit, he maintained his composure in reacting to the comments, earning him praise from his teammates.

For any team that is looking to put its name on the list of Super Bowl champions , having a quarterback with poise is a must. So far Daniel Jones appears to fall into that category, with the question now being whether or not the Giants should accelerate the timeline in which he takes over the starting quarterbacking duties from Eli Manning. But the answer to that question isn’t an easy one, and the Giants should look back at their own team history before making a decision once and for all.

Looking at the Past and Future

Daniel Jones shines again | Giants vs. Bears preseason Highlights
Any quarterback change for the New York Giants will immediately be compared to the quarterback change that saw Eli Manning take over for Kurt Warner during the end of Manning’s rookie season. That switch was handled well by the Giants, with Manning taking over near the end of the season when the Giants’ playoff hopes were already out the window. That patience paid off with two Super Bowl wins later in Eli Manning’s career. This year, the Giants will likely face a similar situation and could handle things the exact same way with Daniel Jones.
This is a Giants franchise that fell well short of expectations last year, going 5-11 and finishing bottom of the NFC East. This year, they aren’t expected to do much better. As of August 23, Super Bowl LIV odds from Betway have the Giants at +10000 to win a championshipmaking them one of the six biggest longshots heading into the year. Their current situation dictates that they should be able to take their time with the quarterback switch, as the team does not need to have a mindset to win now the way that the title contenders do.

Fortunately for the Giants, Eli Manning still appears to have something left in the tank anyway. After receiving comments from team management praising his abilities at this point in his career, Manning has looked decent in preparing for the upcoming year. In his first real action of the 2019 preseason, Manning led a drive that was good for a field goal against the Cincinnati Bengals. That kind of competent quarterback play is exactly what the Giants need for the time being until Jones is ready to take the field for them as a starter.

This kind of situation is always a difficult one for NFL teams, as bringing in a new quarterback too early can result in the team failing to properly develop him. But waiting too long could cost the team in failing to show the proper confidence in a new signal caller. Either way, the New York Giants have shown previously that they are capable of properly handling such a changing of the guard and it will be interesting to see if they can do so again with Jones.