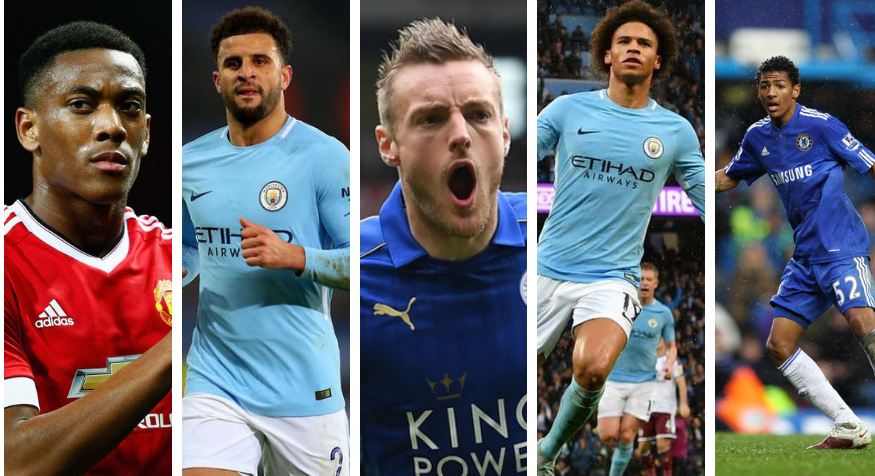 The five fastest players in the English Premier League include –

A recipient of the 2015 Golden Boy Award for the best under-21 player in Europe, Anthony Martial is a French footballer who plays as a forward for the Premier League club, Manchester United. It is his tranquillity in the front of the goal which sets him apart from the other fellow players.

Martial won his first individual honour at United receiving the ‘PFA Fan’s Player of the Month’ in which he scored three goals from two matches. Later, he also gained his second trophy at United, against Liverpool which earned him the club’s ‘Goal of the Month’ award.

Kyle Walker plays for the Manchester City the Premier League club as a right back. In the year 2012, Walker was named as the PFA Young Player of the Year and again in the year 2015, he was titled as the right-back in the PFA Team of the Year for the second time.

Walker made his first start for England, in a 1–0 win against Sweden for which he won the man-of-the-match. Walker played the first England match after Euro 2012, playing the full 90 minutes of a 2–1 win against Italy.

Jamie Richard Vardy plays for Premier League club Leicester City and the England national team as a striker. In the 2015-16 Premier League season, he scored in eleven consecutive Premier League matches, breaking Ruud van Nistelrooy’s record, and was voted the Premier League Player of the Season and FWA Footballer of the Year. Vardy made his international debut in June 2015 and was selected for UEFA Euro 2016 and the 2018 FIFA World Cup.

Leroy Sane is a German professional footballer who plays for the Manchester City and the German national team as a winger and an attacking midfielder.

Having won the PFA Young Player of the Year for 2017-18 Premier League season, Leroy Sane is the fastest player ever recorded in the English Premier League. He also contributed 10 goals and 15 assists during the last season. Sane is undoubtedly one of the speedy attackers in football all over the world.

Patrick Van Aanholt began his football career with Chelsea and made his professional debut at Coventry City on 9th of August 2009 in a 2-1 Football League Championship win over Ipswich Town.

It was in the year 2013 that Van Aanholt won his first senior cap for the Netherlands in a friendly match against Colombia. His record of seven goals in 43 appearances for Crystal Palace after moving to South London in 2016 from Sunderland is a testimony to his ability in getting ahead.

The game of football is certainly captivating and now you can play football on the go, instantly. Yes, you heard that right. Monster Casino offers its players with a wide variety of football slot games such as Football Star, Foxin’ Wins Football Fever, Football Champions Cup and so on. Hurry! Play now!