The NFL’s collective bargaining agreement makes it difficult for some NFL players to collect pay according to their talents, often favoring franchise ownership. Le’Veon Bell is the latest example of a superstar sitting out for better pay. The Pittsburgh Steelers remain +800 favorites to win the Super Bowl, according to odds from BeABetterBettor.com, despite missing one of the best backs in the sport.

History suggests that in the long run, Le’Veon’s holdout will turn out well, similar to other elite NFL running back holdouts. 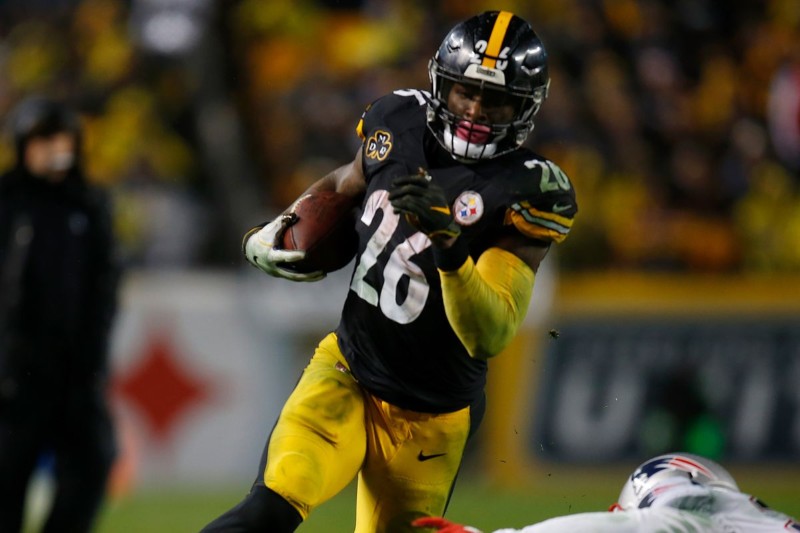 Sure, James Conner’s fantastic breakout season dulls the sting of missing Le’Veon Bell, who recently confirmed that he’s sitting out for the rest of the 2018 season. Bell’s one of the top three backs in the game, capable performing at an elite level on the ground and as a receiver. Prior to his holdout, Bell lead the league in total touches and rushing attempts, accumulating 1,946 total yards from scrimmage.

A two-time first-team all-pro, Le’Veon is looking to receive compensation that matches his overall contribution, instead of receiving less than his worth through the franchise tag that controls his career. Workhorse running backs tend to age quicker than most skill position players. Sitting a season preserves his body, ostensibly extending his prime earning years under a more favorable contract.

Le’Veon still pulls in the big dollars without an NFL contract. Shortly after his year-long holdout was confirmed, Bell joined the Jordan marketing brand, which guarantees Bell strong income, an increased media profile and additional traction for contract negotiations. At this point, there’s little chance that Bell will return to the Steelers. Multiple clubs will compete for the services of Le’Veon, who will greatly boost the offensive profile of any franchise he joins. 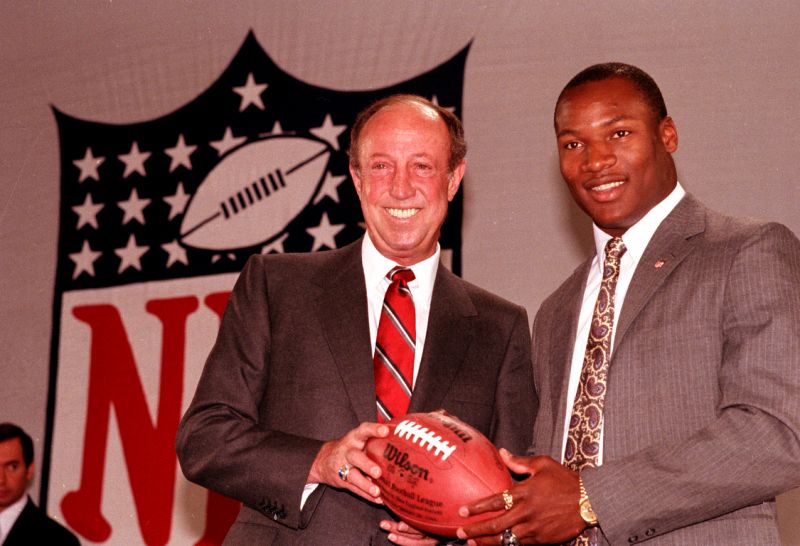 One of the most remarkable athletes in pro sports history, Bo Jackson was an elite prospect who excelled on the gridiron and the diamond. Despite the fact that he was a Heisman Trophy winner in 1985, he ended up missing an entire year after the Tampa Bay Buccaneers drafted him in 1986. In the process of picking him first overall, Tampa Bay ended up making Bo ineligible for his final year of NCAA baseball, a move which Jackson believed premeditated.

After missing the entire 1986 season, Bo Jackson would reenter the draft, selected by the Los Angeles Raiders in the seventh round of the 1987 draft. Los Angeles would witness the spectacle of Jackson’s rookie year, where he averaged 6.8 yards per carry for a total of 554 yards in seven games. On Monday Night Football, star linebacker Brian Bosworth promised to destroy Bo before the game. Jackson would literally run over Bosworth en route to a then-record 227 rushing yards, including two rushing TDs and a receiving touchdown.
Unfortunately, Bo Jackson rapidly accumulated injuries on the gridiron, forcing Bo to retire due to hip injuries after only three seasons. Instead, Jackson would go on to become one of the most exciting players in the MLB, known for his mix of speed and power – along with snapping baseball bats like twigs when he struck out. As the only athlete to earn an all-star nomination in the MLB and the NFL, Bo knows baseball, Bo knows football and Bo knows holdouts. 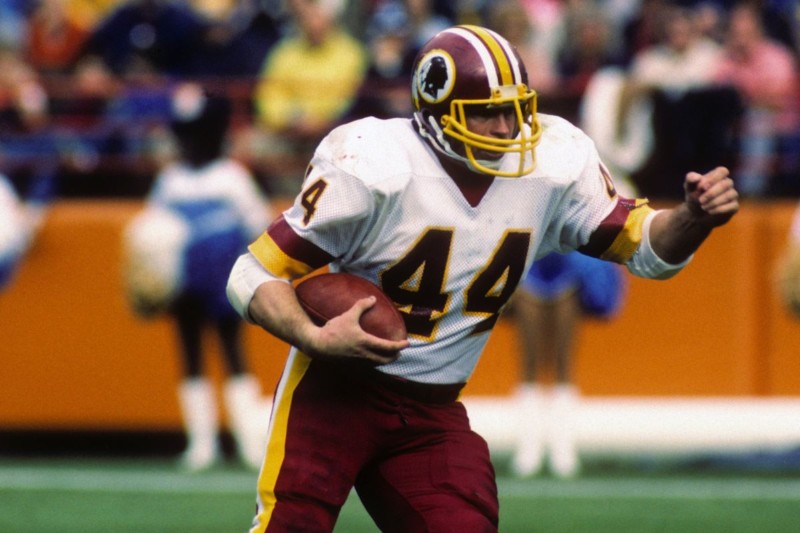 The NFL was a different creature back in the day, more like the wild west compared to the relatively tame version of modern pigskin. Players were paid a lot less. Owners felt far less inclined to pass along a share of their profits. NFL labor organization among players was even less influential, further increasing the leverage of owners. Modern players also have access to an incredible number of media and advertising opportunities, allowing for additional revenue outside of an NFL contract.

As such, when John Riggins decided to hold out in 1980, he was taking a far greater risk compared to most players who decide to withdraw their services for equitable pay. Riggins already endured knee surgery and Washington responded to his holdout by putting him on a “camp-retired” designation which precluded playing for another team for the rest of the season. “You need to get me back in there. I’ll make you famous,” Riggins hold coach Gibbs during the middle of the dispute.
This holdout would wrap up well for both sides – Riggins ended up signing the biggest contract for a running back in NFL history in 1985. John also won Super Bowl MVP with Washington, putting together four consecutive post season matches with 100 yards – a record which he extended to six consecutive games with 100 yards or more the next playoff season. “I’m bored, I’m broke, and I’m back” John stated when he announced his return. His holdout got him a ring and a big boost in pay. 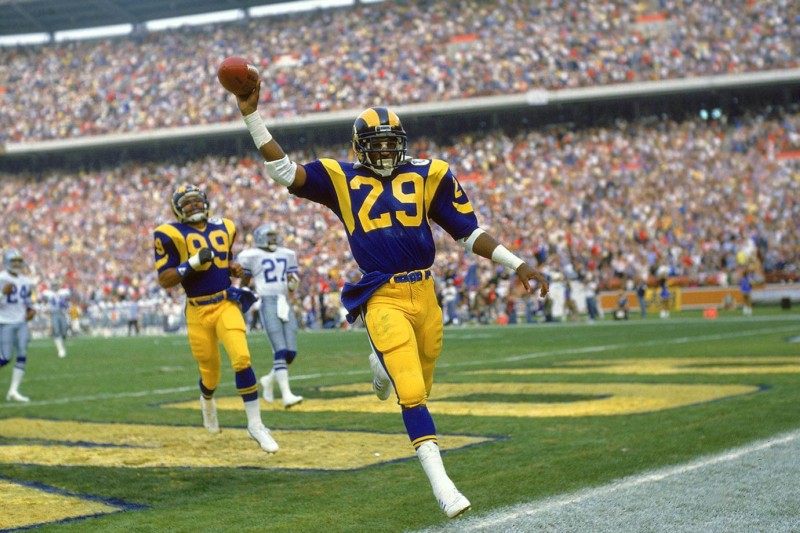 Eric Dickerson – Los Angeles Rams & Indianapolis Colts
One of the greatest running backs also endured one of the most heated contract disputes. In his sophomore season, Eric put together the finest statistical campaign for a running back in NFL history, earning 131.6 yards per game and a total of 2,233 yards in 16 games. In his rookie year, Eric accumulated 1,808 yards on 113.0 yards per game. Throughout his career, Dickerson would lead the league in rushing yards four times and yards per game five times .

Dickerson’s incredible achievements still didn’t result in a significant payout. He would hold out for the first time with the Rams, which caused Los Angeles to part ways with the superstar, who landed with the Indianapolis Colts. Dickerson would end up holding out again, because the Colts didn’t learn from the Rams mistakes.
Indianapolis started with an 0-3 record without Eric, who would eventually sign for $10 million over four years. Dickerson’s holdout was perfectly timed, netting him a big contract before his star faded. 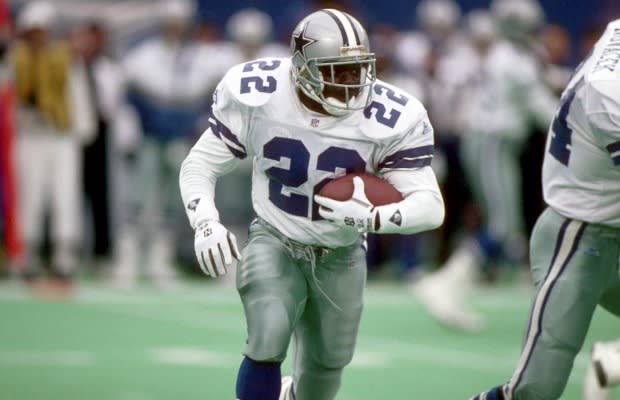 Emmitt Smith rewrote Dallas football record books throughout his illustrious career, winning three Super Bowls in the process. For whatever reason, Dallas still messed with his money, forcing Emmitt to hold out in 1993.

Owner and de facto general manager Jerry Jones tried to call Smith’s bluff, but the Cowboys were awful to begin the campaign. After two losses in a row, the Cowboys reassessed their situation.

The result? Emmitt rightfully became the best paid running back in the NFL, leading the league in total yards and rushing yards per game. Smith completely destroyed Jerry Jones in this negotiation, out-leveraging a billionaire for well-deserved pay.