2017: After 56 years in San Diego it was a new beginning for the Los Angeles Chargers with a new coach in Anthony Lynn. The Chargers began the season on Monday Night on the road against the Denver Broncos. Philip Rivers and Melvin Gordon had no answers for the fearsome Denver defense as they were held to only seven points in the first three quarters. Down 24-7 in the fourth quarter, the Chargers defense got them back in the game with consecutive turnovers which led to touchdown passes by Philip Rivers. The Chargers would get the ball at the end of the game with a chance to tie the game. However, Yunghoe Koo’s first career Field Goal attempt was blocked by Shelby Harris from 42 yards out. Koo made his first attempt, but it was negated by a timeout called by Denver, right before the ball was snapped. Koo’s woes continued the next week as the Chargers hosted the Miami Dolphins in their Los Angeles debut at their temporary home in the StubHub Center, missing a 44-yard attempt that would have given the Chargers the lead with only 5 seconds left. The Dolphins as a result won 19-17. Koo would be released by the team two weeks later and replaced by veteran kicker Nick Novak. Los Angeles also lost their following two games, both at home to the Kansas City Chiefs 24-10 and against Philadelphia Eagles where a fourth-quarter comeback fell short in a 26-24 loss as most home games were filled with fans of the visiting team. Their 0-4 start was not expected by many analysts, but their inability to fill their home stadium with loyal fans and not supporters of the opposing team was a surprise to nobody who followed the politics behind the move to L.A. The Chargers got their first win of the season 27-22, on the other side of the in Week 5 against the New York Giants, who were also winless. The Chargers travelled back to the West Coast to face the Oakland Raiders on the road and won their second straight game 17-16, with the difference coming from a missed extra point by Georgio Tavecchio in the fourth quarter. Los Angeles got their revenge on the Broncos the following week, shutting them out 21-0 for their first home win in Los Angeles since December 18, 1960. Their win streak would end at three games following a loss on the road to the Patriots. Despite only surrendering one touchdown, the Patriots had no problem moving the ball downfield all day, setting up four field goals for Stephen Gostkowski and recording a safety after Travis Benjamin muffed a second-quarter punt. After their Week 8 bye, the Chargers had another heartbreaker on the road against the Jacksonville Jaguars. The 20-17 overtime loss was especially bitter as the Chargers had the game won, but a Joey Bosa roughing the passer penalty put Jacksonville in field goal range late in regulation. The Chargers recovered from that loss the next week by trouncing the Buffalo Bills 54-24 at the StubHub Center, thanks to the puzzling decision to bench Tyrod Taylor for the rookie quarterback Nathan Peterman. Peterman only made it halfway through the game before being replaced for Taylor after throwing five interceptions in the first two quarters. Los Angeles’ next game fell on Thanksgiving Day, with Philip Rivers carving up the Dallas Cowboys secondary to the tune of 434 yards and three touchdowns. Keenan Allen feasted away with 172 yards off 11 catches for his best game of the season. They won 28-6 with the Cowboys unable to muster any offense without Zeke Elliott. The Chargers continued their late-season surge after winning consecutive home games, 19-10 against the winless Cleveland Browns and 30-13 over the Washington Redskins to sit at 7-6. However, their four-game winning streak ended as they continued to be tormented by the Chiefs, losing 30-13 at Arrowhead Stadium, as the Chargers watched a chance to take over first place in the AFC West slip away. Despite beating the New York Jets 14-7 and Oakland Raiders 30-10 in their final two games to close out the season at 9-7. Despite their winning record the Chargers missed the playoffs due to tiebreakers. The talent was there for a deep playoff run, but a collection of devastating losses and costly mistakes early in the season haunted them in the end. Philip Rivers threw for 28 touchdowns passed for 4,515 yards, Melvin Gordon rushed for 1,105 yards and Keenan Allen racked up nearly 1,393 yards on 159 receptions, finishing third in the NFL behind Julio Jones and Antonio Brown.
Wriitten by Will Petersen


Barron Hilton picked the name when he purchased an AFL team.“I liked it because they were yelling ‘charge’ and sounding the bugle at Dodgers Stadium and at USC games.” 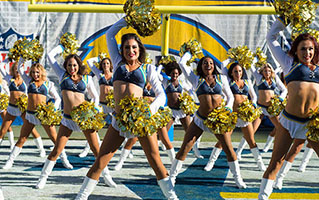