Spring Training 1969: In a sign that the Pilots were doomed for failure Lou Piniella a 26-year-old rookie is traded at the end of spring training. Piniella was sent down a few weeks earlier despite having substantial numbers in spring games. The problem was that Pilots manager Joe Schultz did not like Piniella, who was set to make $175, 000. The Pilots did not want to pay him, so they got rid of him. Piniella would end up with the American League’s other 1969 expansion team, the Kansas City Royals, and he would win that year’s Rookie of the Year.

1969: The Pilots opened the season in Anaheim on April 8th with a 4-3 win over the Angels. After losing their next game, the Pilots went to Seattle to open their home schedule. As the fans entered the stadium for the home opener on April 11th, workers were still putting benches in place as Sicks’ Stadium. Some fans had to wait for three innings to be seated. When all were counted, 17,150 people came to see their team beat the Chicago White Sox 7-0. Sicks’ stadium, a converted minor league stadium, was just a temporary home. Problems arose early on plans for a new ballpark. A dozen sites were on the commission’s list of possible locations, and by November of 1968, the Seattle Center was selected. Beginning in April 1969, a group called the “Committee to Save the Seattle Center,” to prevent the construction at the center filed a petition. The group also wanted to have the issue put on the November ballot. The problem would be multiplied when Pilots owner William Daley said, “Seattle has one more year to prove itself,” a clear ultimatum treating to move the newly founded team. On October 2nd, 5,473 Pilot fans, for a season total of 677,944, came to see the season finally against the Oakland A’s. They would lose 3-1 and finish the year 64-98, and in last place and 33 games out of first. One bright spot was Harper, who would lead the majors with 73 stolen bases. Little did the city know this would be the last game for the team as the Pilots.

Spring Training 1970: On March 24th, a judge listened to the State of Washington and the City of Seattle on why the team should not be moved. The hearings lasted for three days in the King County Courthouse. On the last day, Marvin Miles took the stand and told of the problems the team faced. He said he was unable to pay the salaries of the office staff, coaches, and scouts; he could not pay the players’ bonuses. If the players were more than ten days late in paying them, they would all become free agents, and the Pilots would have no team to field for the season. On March 25th, the judge lifted the restraints and allowed the team to move. Five days later, it became official as the papers were signed for the transfer of the team to Milwaukee, where the team’s name was changed to Brewers.

After 1970: Seattle would eventually land another expansion team in 1977, and when that team made its first debut, former Pilot Diego Segui delivered the Mariners first pitch.

Lasting Legacy: Pitcher Jim Bouton would spend the entire season writing a daily diary about life in baseball. Bouton would play for the Pilots until an August 24th trade, and absent a two-week stint with Pilots top minor league affiliate in Vancouver. The book entitled “Ball Four” would change the perception of life in baseball and would become an instant classic. 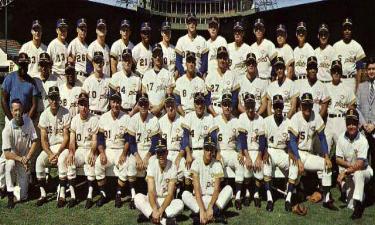 
Named Pilots because of Seattle's location on the Pacific Ocean where sailing is a favorite past time.

©MMIX Tank Productions. Stats researched by Frank Fleming, all information, statistics, logos, and team names are property of Major League Baseball. This site is not affiliated with the Seattle Pilots or Major League Baseball. This site is maintained for research purposes only. All logos used on this page were from Chris Creamer’s Sports Logos Page.
Page created on February 26, 2001. Last updated on April 7, 2009 at 11:35 pm ET.