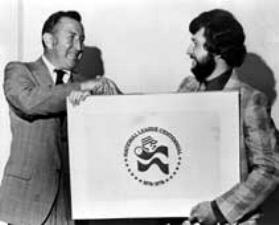 Profile: Charles Stoneham Feeney was born on August 31, 1921 in Orange, New Jersey. Three year before his birth his grandfather Charles Stoneham paid $1 Million to buy the New York Giants. While growing up Chub would often serve as bat boy for the New York Giants. After graduating from Dartmouth, Charles Feeney served in the Navy during World War II. When he returned form duty in 1946 his uncle Horace was now in control of the Giants, and Charles, who earned the nickname Chub when he was a baby, was offered a minor front office job.

Chub worked part time for the Giants while attending Fordham Law School. In 1950 he was promoted to the position of Vice President, effectively becoming the club’s General Manager. The Giants won the Pennant in 1951, and won a World Championship in 1954. In 1957 Horace Stoneham announced he was moving the franchise to San Francisco. Chub was reluctant to follow his uncle at first, but he immediately became enchanted with the city upon moving there. The Giants captured the NL Pennant again in 1962. In 1969 Feeney was in line to be named Commissioner of Baseball, but a number of American Leaguers Owners objected, and Bowie Kuhn was chosen instead.

One year after losing out on a chance to be Commissioner, Chub Feeney would unanimously be selected to fill the office of the retiring NL President Warren Giles. Chub Feeney would hold the office of NL President for 17 years. Feeney a firm traditionalist regarded protecting the NL from the DH as his greatest achievement in office, while the National League continued its dominance in the All-Star Game, losing just twice during Chub’s tenure.

After steeping down as NL President Feeney took a job as president of the San Diego Padres, but he would step down after just 15 months on the job, following an embarrassing incident when he showed an obscene gesture to a group of heckling fans on Fan Appreciation Night.