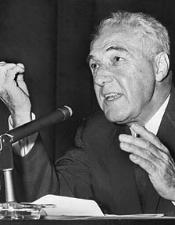 Profile: Born on December 19, 1894 in Wawaka, IN, Ford C. Frick attended high school in Rome City, IN and then attended DePauw University in Greencastle, IN from which he graduated in 1915. In the fall of 1916, Frick joined the Colorado Springs, Colorado High School faculty as an English teacher. He also began working for the Colorado Springs Gazette at that time and soon gave up teaching to concentrate on newspaper work.

In 1918 he became supervisor of training in the rehabilitation division of the War Department for four states (Colorado, Utah, New Mexico and Wyoming). In early 1919, he worked for the Rocky Mountain News in Denver before returning to Colorado Springs to open an advertising agency. While there he also wrote an editorial column for the Colorado Springs Telegraph.

Ford C. Frick went east in 1922 to join the sports staff of the New York American. In August 1923, he moved to the Evening Journal. While employed there, he covered the Yankees and became a ghostwriter for Babe Ruth. In May 1930, Frick expanded his efforts to radio and worked as a sportscaster with WOR. He filled a dual role until February 1934, when he was named the first director of the National League Service Bureau, the publicity outlet for the National League.

On November 8, 1934, shortly before his 40th birthday, Frick was elected President of the National League, succeeding John A. Heydler, who resigned because of poor health. One of Frick’s first acts as NL President was an enthusiastic endorsement of the proposed National Baseball Museum and a suggestion to include a Hall of Fame to honor the game’s greats.

During his league presidency, he was instrumental in saving the Brooklyn Dodgers, Philadelphia Phillies and Boston Braves from bankruptcy, and also helped place the Cincinnati Reds and Pittsburgh Pirates on firmer financial footing. He held the position until September 1951 when the 16 club owners elected him Commissioner on September 20, 1951.

The elevation of Frick to the game’s top post marked the end of a long and difficult search by the club owners who could not decide between Frick and Cincinnati Reds President Warren Giles. Some National League owners were hesitant about voting for Frick because there was no apparent candidate to replace him as league president. It was not until Giles withdrew from the race that Frick was elected and Giles took the NL post.

As Commissioner, Frick guided the game through an era of unprecedented reconstruction, expansion and transition, and helped it reach a new plateau of stability. It was during his tenure that the majors grew from eight to ten teams in each league, the national television contracts were refined, and many new procedures were adopted, including the draft and the college scholarship plan. Frick was also active in broadening the international scope of the game. He worked with groups in Japan, Latin and Central America, Holland, Italy and Africa, introducing many of them to baseball for the first time.

Ford C. Frick most questionable decision while commissioner came in 1961 when he placed an asterisk on Roger Maris’ record 61 Home Run season. Frick, who once was a ghost writer for Babe Ruth, did not want to see the Bambino’s record fall, and with an expanded schedule made up a rule stating that Maris needed to break the record in 154 games. Frick’s asterisk would remain in place for nearly 30 years.

In November 1965 Frick retired at the age of 71 after serving 14 years as Commissioner. He would go on to be inducted into the Hall of Fame in which he helped establish in 1970. He died on April 10, 1978, at the age of 83. Shortly after his death an award was dedicated in his name for baseball broadcasters with distinguished careers. The Ford C. Frick Award would go on to be given annually granting the honoree induction into the broadcaster wing of the Hall of Fame.