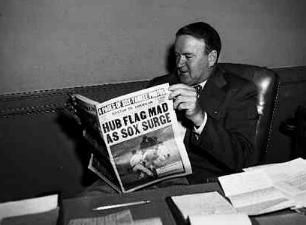 Profile: Joseph Edward Cronin was born on October 12, 1906 in San Francisco just months after an earthquake damaged the city, and impoverished his family. Cronin who attended local schools while growing up played baseball in Excelsior Park across the street from his home. While attending high school Cronin excelled in several sports and worked as a Bank Teller.

Upon graduation Cronin turned down an athletic scholarship from St. Mary’s College so he could work, and help support his family. Cronin would sign up to play in a semi-pro baseball league in nearby Napa. There he caught the eye of Pittsburgh Pirates scout Joe Devine, who inked the 19-year old to a professional contract. Cronin would make his Big League debut in 1926, but with established stars Pie Tranyor already at SS, he didn’t get much of a chance to play and was sold to Kansas City of the American Association. Cronin would eventually be sold to the Washington Nationals, and would finally get a chance at playing every day in 1929.

Cronin would have a break out year in 1930, and would become one of the premier stars of the American League. In 1933 Cronin was named Player-Manger of the Nationals, and guided them to the World Series. However after a disappointing 1934 Cronin was sold to the Boston Red Sox for a then staggering $250,000. What made the move odd was that Cronin had recently married Nationals owner Clark Griffith’s niece. In Boston Cronin would continue his stellar career as player-manager guiding in that capacity for 10 years before ending his playing career in 1945. Cronin would end his career with 1,424 career RBI and a .301 average which helped get him enshrined in the Hall of Fame in 1956.

After retiring as a player Cronin continued his career as Manger until 1947, guiding the Sox to the World Series in 1946. In 1948 Cronin was promoted to the post of General Manager a post he held until being named American League President in 1959.

Joe Cronin would spend 14 years as President of the American League; during his tenure he oversaw expansion as the AL grew from 8 to 12 teams. He brokered the deal that kept baseball in Washington despite the fact that his brother-in law moved the original team to Minnesota. Ultimately it would be a short-term solution as the new 1961 expansion Senators were a complete failure, and were off to Texas after the 1971 season.

Cronin’s tenure was not without controversy in 1973 the American League adopted the Designated Hitter rule, allowing a bench player to bat for the pitcher in the batting order. While it helped lengthen careers, and helped avoid unnecessary injuries to pitchers, it also took strategy away from the Junior Circuit.

Cronin would retire after the 1973 season, but not before going through more controversy. After the World Series Oakland Athletics manger Dick Williams signed a deal to manage the New York Yankees. However Cronin said the A’s still held the rights to Williams and would not allow him to take over the reins of the Yankees despite allowing Ralph Houk the Yankees former manger to sign with Detroit Tigers under similar circumstances.

After retiring, Joe Cronin remained involved with the American League in a largely figurehead role as Chairman until his death at the age of 77 on September 7, 1984.