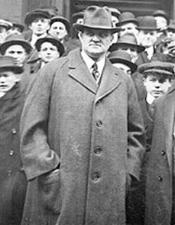 Profile: John Kinley Tener was born in Ireland on July 25, 1863. When his family immigrated to the United States Tener ingratiated himself into American Lifestyle by playing baseball. Tener was quite a good pitcher that he caught the eye of scouts, and he signed a number of contracts to play professional baseball.

John Tener finally made it to the big leagues in 1888 on the Chicago White Stockings of the National League. While not playing baseball Tener worked as an accountant. When the White Stockings went on a Worldwide Barnstorming tour Tener was selected by the players to be the team’s treasurer on the long trip.

When the team returned for its tour they learned NL Owners had imposed tighter salary restrictions this angered many in the league, and led to the formation of Brotherhood of Professional Players the first attempt at a union. Many Players would quit there jobs on National League teams, instead of going on strike the players had decided to form there own league. The newly formed Player League had many stars players, who had jumped form the NL, and American Associations in 1890. One of the leaders of the new Player’s league was John Tener was not only a pitcher for the Pittsburgh club, but was the league’s secretary. However after just one season the league, which was leaking red ink, would fold forcing many players to beg for their jobs back with the NL. Most players found spots on various rosters. However, Tener who had a career record of 25-31 did not and his career as a Professional Baseball Player was over.

Despite his playing career coming to an end John Tener landed on his feet, and entered a profitable career in banking. Form there Tener would enter the world of politics, where he was elected to congress in 1908. Two years later Tener was elected Governor of Pennsylvania. Tener would serve one 4-year term as Governor before being offered the post of NL President in 1914. Instead of seeking reelection Tener returned to the sport of baseball.

When Tener takes the post of President the National, and American Leagues have a challenge form the newly formed Federal League, which begins to sign away star players from both leagues. Working with AL President Ban Johnson, on the National Commission of Baseball Tener works hard at trying to drive the new league out of business. In 1915 the league would fold after just two seasons.

Tener was also a strong supporter of Umpires, fining and suspending players and manager whenever they got abusive. In 1917 he suspends New York Giants Manager John McGraw for 16 games after taking a throwing a punch at umpire Bill Byron. McGraw would protest and would sound off to Sid Mercer a local New York sports writer. However, when the story is published McGraw denies his comments forcing Tener to call for a hearing. During that hearing Tener found McGraw guilty and fined him an additional $1000.

Tener would face another crisis in 1918 when a dispute developed over the contract of Pitcher Scott Perry between the NL and AL owners. Perry had one big year, for the last-place 1918 Philadelphia Athletics, winning 21 games. His success reminded the Boston Braves that they had a technical claim to him. The National Commission agreed, but Connie Mack, with Ban Johnson’s backing, went to court to retain Perry. The uproar weakened the Commission’s authority, and led to the resignation of NL President John K. Tener.

John K. Tener died on May 19, 1946 at the age of 82. Perhaps his biggest lasting legacy would be the annual Congressional Baseball Game between the Republicans and Democrats on Capitol Hill, which he started in 1909.

©MVII Tank Productions. This site is not affiliated with the National League or Major League Baseball. This site is maintained for research purposes only. Return to NL Presidents.
Page created on May 10, 2002. Last updated on March 4, 2007 at 11:30 pm ET.