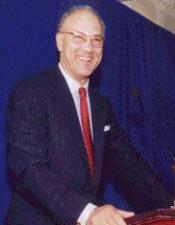 Profile: Leonard S. Coleman was born on February 17, 1949 in Newark, New Jersey. While growing up in nearby Montclair, Coleman developed a passion for baseball. In High School he lettered in baseball while excelling in football, being named All-State and All-American at halfback during his senior year.

Leonard Coleman continued playing baseball and football as an undergraduate at Princeton University, becoming the first black player ever to score a touchdown for that prestigious Ivy-League school. Still he felt that he was not being given enough opportunity to prove himself with the team–and he thought his race was the reason. As a sophomore, he joined two other black players in a protest, charging the Princeton football program with violations of the university’s policy of equal opportunity for minorities. When the complaints drew national attention, Coleman and his two friends were dismissed from the team, but a panel charged with investigating the incident urged greater sensitivity toward minority students in the athletic program.

After earning his bachelor’s degree from Princeton in 1971 Coleman moved on to Harvard University, where he pursued dual master’s degrees in public administration and education. With such stellar academic credentials he might have entered the work force on the fast track, but instead, in 1976, he accepted a position as a missionary to Africa for the Protestant Episcopal Church. There he put his education and expertise to work as a consultant on health care, education, and community services. All told he spent four years in Africa, serving in 17 different countries.

Returning to New Jersey in 1980, Leonard Coleman began to consider a career in politics. He first served as president of the Greater Newark Urban Coalition, an organization that sought to create liaisons between businesses, community groups, and government. In 1982 he was appointed commissioner of the New Jersey Department of Energy. Coleman was hardly the stereotypical public servant, however. Midway through his four-year appointment to New Jersey’s Energy Department, at age 35, he worked his way into the Metropolitan Baseball League, a semi-pro affiliation catering to college players and other young pro baseball hopefuls. His late fling with baseball was the source of much joking in the governor’s cabinet, but on the field Coleman was a serious competitor, over two years of play, he compiled a .337 career batting average.

Leonard Coleman proved to be a great asset to the Republican Party in New Jersey. He helped to promote Governor Kean among black voters in such cities as Newark, Trenton, and Camden, and indeed Kean earned more votes in those cities than any Republican had in years. In 1986 Kean named Coleman commissioner of the New Jersey Department of Community Affairs, another cabinet- level position with an annual budget of some $250 million. Coleman had greater ambitions as well, at one time entertaining the idea of running for a Senate seat. After losing in the primary in 1988, Coleman left the public sector for a job as an investment banker with the prominent New York firm Kidder, Peabody & Co.

Coleman eventually was named vice president of municipal finance for Kidder, Peabody, and he might have spent the rest of his career there. Instead, in 1991, he accepted his first position with Major League Baseball: director of market development. Coleman was charged with the task of reviving fan interest in baseball at a time when attendance was beginning to slip in many markets. He decided that the best way to prepare professional baseball for a bright future was to spark more interest in the game among youngsters. One program that caught his attention was Reviving Baseball in the Inner Cities, an initiative aimed at keeping city teenagers active in baseball after they leave the Little Leagues. The program began modestly but has–with Coleman’s encouragement–expanded to more than 30 cities, bringing with it new playing fields, equipment, and organized baseball programs.

In March of 1994, the owners of the National League baseball teams unanimously chose Coleman to succeed outgoing Bill White as president of the National League. Coleman described his new position in Sports Illustrated as “a dream come true.” However the dream can become a nightmare, as Coleman began his duties with the NL, a strike that cancelled the end of the season, postseason, and World Series, was just beginning, tarnishing the image of the national pastime. To Coleman fell the task of restoring baseball’s image and promoting the game as wholesome family entertainment. Baseball would eventually bounce back, but in 1999 Leonard Coleman was out of a job as the NL and AL Presidents offices were abolished. Coleman would go on to take a job as paid advisor to Bud Selig.

Since losing his job as President in 1999, Leonard Coleman has continued to use sports as a way of community improvement, leading the efforts to build a major sports arena in Newark for the NHL’s New Jersey Devils.