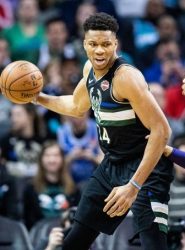 The Milwaukee Bucks continued to tower of the Eastern Conference on Sunday, beating the Charlotte Hornets 93-85. Leading the way was Giannis Antetokounmpo, who became the first member of the Bucks to have a 40-20 game since Kareem Abdul-Jabbar in 1974. Antetokounmpo finished the game with 41 points, 20 rebounds, and six assists, continuing to make a case for a second straight MVP award. With the win, the Bucks improved their NBA best record to 52-8.