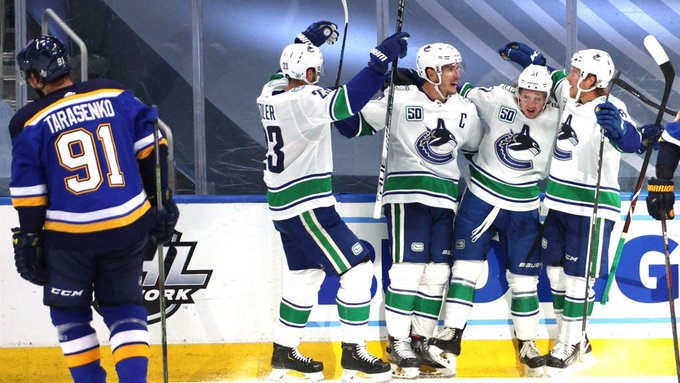 The defending Stanley Cup Champion St. Louis Blues are off to a bad start in the 2020 postseason, losing Game 1 of their first-round series to the Vancouver Canucks 5-2. It was a game to forget for goalie Jordan Binnington who allowed a pair of goals in the third period to allow Vancouver to seize control of the series. The Blues had been atop the Western Conference before the COVID stoppage, but went winless in the round-robin and settled for the fourth seed. The Boston Bruins had similar struggles in the round-robin after winning the President’s Trophy but managed a 3-2 win in double overtime over the Carolina Hurricanes. The surprise of the day saw the New York Islanders rally to stun the Washington Capitals, while the Philadelphia Flyers beat the Montreal Canadiens 2-1 in Toronto. Out west in Edmonton, it was the Colorado Avalanche smothering the Arizona Coyotes 3-0.