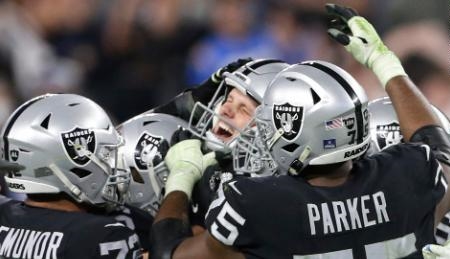 In a tumultuous season for the Las Vegas Raiders, they faced-off against division opponent the Los Angeles Chargers. Both teams came into the game at 9-7, the scenarios were simple, win, and you’re in….There was also another scenario though, one that didn’t seem like it was realistically in the cards. That being a draw.

If the game ended in a tie, both the Raiders and Chargers would have made the playoffs. In a competitive game that the Raiders controlled the tempo of, the score was 29-14 in the 4th quarter, and seemed virtually over.  Chargers QB, Justin Herbert refused to quit though, as he engineered multiple 4th down conversions, and threw two touchdown passes to Josh Palmer and Mike Williams to push the game to over-time.

If people weren’t thinking a draw was possible in the beginning of the game, it was certainly feasible at this point.  The Raiders have persevered all year, and for the 5th time this season, they won a game as time expired. The Raiders actually had an opportunity to kneel the ball, which would have ended the game 32-32 even. However, the Chargers took a late timeout, which then prompted Las Vegas to kick a field goal. Daniel Carlson’s attempt was true from 47.

The win sends the Raiders to the tournament, they’ll travel to Cincinnati for Saturday’s 1st Wild Card game of the postseason.  As for the Chargers, their inability to close games out is ingrained into their DNA. While there’s no questioning their offensive talent, they have quite a bit of work to do when it comes to developing a winning mentality throughout their roster and coaching staff.