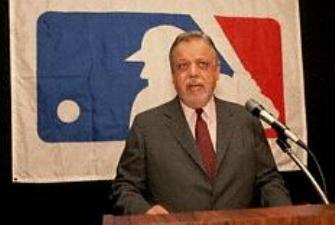 Profile: Born in Boston, MA on April 4, 1938, A. Bartlett Giamatti attended Yale University where he received a Bachelor of Arts degree, magna cum laude, in English in 1960. Giamatti went on to receive a Ph.D. from Yale in Comparative Literature in 1964. After receiving his doctorate, Giamatti taught Italian and Comparative Literature at Princeton University. He returned to Yale in 1966 when he joined the faculty as an assistant professor of English. He became a full professor in 1971 at the age of 33 and served as the director of the Division of Humanities from 1975-1978. He became president of Yale in July 1978, and served eight years. After leaving that position he joined Major League Baseball and was named the 12th president of the National League on December 11, 1986.

In two years as NL President, Giamatti earned a reputation for preserving baseball’s traditions, values and integrity. His presidency placed an emphasis on the need to improve the environment for the fan in the ballparks. Giamatti has written many books, essays, articles and reviews on Renaissance Literature and baseball. His baseball writings include: “Tom Seaver’s Farewell”, Harper’s Magazine (September 1977), which won the E.P. Dutton Best Magazine Sports story of the Year in 1977; “The Green Fields of the Mind”, Yale Alumni Magazine and Journal (November 1977); “Recall, as the Series Ends, the Afternoon of the Fall”, Hartford Courant (October 18, 1978); “Men of Baseball, Lend and Ear”, New York Times (June 16, 1981); “A Magic Game and an End to Innocence”, Boston Sunday Globe (April 7, 1985); “Baseball and the American Character”, Harper’s Magazine (October 1986); “A Ballpark is Freedom’s Ring”, Boston Globe Special Edition (October 6, 1986); Foreword to The Armchair Book of Baseball II (April 1987); “To Sports and Fans: Clean Up Your Act”, The Boston Globe (July 20, 1987).

Bart Giamatti was elected to a five year term as baseball’s 7th Commissioner on September 8, 1988 by a unanimous vote of the 26 club owners. After being elected Commissioner, Giamatti created a deputy commissioner position and appointed Francis T. Vincent, Jr. to the post.

When Giamatti took over the commissioner’s post on March 1, 1989 baseball was in the early stages of an investigation into the gambling activities of Cincinnati Red Manager Pete Rose. The investigation marred the entire 1989 season, with accusations that Rose bet on baseball and the Reds, while managing and playing for them. Rose, baseball’s all-time hit leader was a hero and icon to many fans, and the rumors were seen as damaging to the game. Determined to maintain the integrity of the game, Giamatti entered into an agreement with Pete Rose that was tantamount to a lifetime suspension on August 23, 1989. The agreement came to avoid a court battle regarding gambling by Rose.

The stress of the Rose scandal had a negative effect on the game, but may have had a deadly effect on Giamatti. Just nine days after signing the agreement with Rose, Giamatti a heavy smoker died of a heart attack at his summer home in Martha’s Vineyard, MA on September 1st, on the start of the Labor Day weekend. Deputy commissioner Francis T. Vincent Jr. would take over the post left vacant by Giamatti’s death. Although the agreement with Pete Rose was tantamount to a lifetime suspension, many believe it was Giamatti’s intention to one day reinstate Rose, so he could be eligible for the Hall of Fame.

©MVII Tank Productions. This site is not affiliated with the Major League Baseball.  This site is maintained for research purposes only. Return to NL Presidents Return to MLB Commissioners.
Page created on May 2, 2002. Last updated on March 10, 2007 at 12:35 am ET.