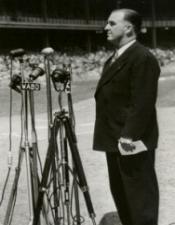 Profile: A.B. “Happy” Chandler was elected baseball’s second Commissioner on April 24, 1945 by a unanimous vote of the 16 club owners. His brief six year tenure encompassed some of the most significant developments in the game’s history.

Chandler was born on July 14, 1898, in Corydon, KY. He was captain of the Corydon High School baseball and basketball teams as a senior and graduated in 1917. He entered Transylvania College in Lexington, KY that same year. The ever-smiling Chandler earned his nickname as a member of the baseball and football teams there. After graduation in 1921, Chandler entered Harvard Law School. One year later, he transferred to Kentucky University Law School, where he received his degree in 1924. In 1931, he was elected Lieutenant Governor of Kentucky. He became governor in 1935 and four years later became Senator, serving until his election as Commissioner.

Following the death of Kenesaw Mountain Landis in November 1944, the major league club owners began searching for a replacement. Colonel John O. Gottlieb of the general staff of the War Department in Washington – a good friend of Chandler’s – was aware of Chandler’s interest in the commissionership and campaigned on his behalf. Although Chandler’s name was the last to be brought before the meeting of owners on April 24, 1945, he was elected unanimously. With World War II still in progress, he remained in the senate until October 29th of that year.

Chandler’s first year in office was marked by the decision of Brooklyn Dodgers’ general manager Branch Rickey to break baseball’s race barrier. Although all 15 other clubs disapproved, Chandler welcomed the idea, and in October 1945, the Dodgers signed Jackie Robinson to a 1946 contract with their Montreal farm team in the International League. In 1947, Robinson became the first black player to play Major League Baseball.

Chandler’s second full year, 1947, was a stormy one. A feud had developed between New York Yankees President Larry MacPhail and Brooklyn Dodgers officials, including Rickey and manager Leo Durocher. MacPhail had signed Dodgers coaches Chuck Dressen and John Corriden as aides to newly hired Yankee manager Bucky Harris while they were still employed by the Dodgers. Durocher, on the other hand, had caused a furor by actively seeking the Yankee managerial position while still employed by the Dodgers. On April 9th, just six days before Opening Day, the Commissioner suspended Durocher for the entire season for “conduct detrimental to baseball,” regarding his association with gamblers. Chandler also suspended Dressen for 30 days and fined MacPhail and the Brooklyn club $2,000 each.

In his later years Chandler remained deeply interested in politics and was especially close to Gov. Wallace Wilkinson who helped restore Chandler’s position on the University of Kentucky Board of Trustees, after he was removed for alleged racial slurs. In 1989, in collaboration with Vance H. Trimble, Chandler published his autobiography, Heroes, Plain Folks, and Skunks. Chandler died two years later a month short of his 93rd birthday.

©MVII Tank Productions. This site is not affiliated with the Major League Baseball. This site is maintained for research purposes only.Return to MLB Commissioners.
Page created on May 6, 2002. Last updated on March 10, 2007 at 12:10 am ET.