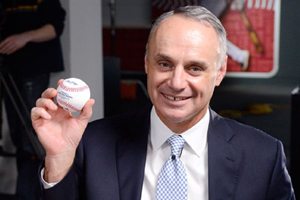 After law school, Rob Manfred clerked for Judge Joseph L. Tauro of the United States District Court for the District of Massachusetts. He later became a partner at Morgan, Lewis & Bockius, focusing on labor and employment law. In 1987 Rob Manfred began working with Major League Baseball working on the league’s collective bargaining deals. During the 1994-95 strike, Manfred served as outside counsel for the owners. Four years later he would join the Major League Baseball Commissioner’s office on a full time basis, serving as the Executive Vice President of Economics and League Affairs.

In 2002 Rob Manfred led negotiations with the MLB Player’s Association leading to a four year Collective Bargaining Agreement. The CBA was reached without a labor stoppage, it was the first time in 30 years that a new contract with the players was agreed to without a strike or a lockout. Part of the 2002 CBA included drug testing for performance enhancing drugs, it was the first time that the players agreed to any form of drug testing. Rob Manfred was also able to successfully negotiate contracts with the MLBPA in 2006 and 2011 without any labor pains.

Following the 2013 season, Bud Selig promoted Rob Manfred to Chief Operating Officer of Major League Baseball, becoming second in command in the Commissioner’s office. That same year, Manfred helped lead MLB’s investigation into the Biogensis scandal, which cutoff one of the most prominent supplier of Performance Enhancing Drugs to baseball stars. Upon Selig’s retirement, Manfred was chosen to replace the outgoing the commissioner with his term beginning on January 25, 2015.

Upon Rob Manfred assuming office the sport of baseball and Major League Baseball had never been in better shape, but there were still some minor concerns. One of those was pace of play, which had slowed to a crawl at times. Realizing slow games that last over three hours could begin to have negative reaction on attendance and fan interest, the new commissioner started to initiate rules like forcing hitters to stay in the batter’s box during at bats and including and the installation of time clocks to limit the time spent around commercial breaks. There was also discussion of an experimentation of pitch clocks in the minors.