2017: Against the New York Red Bulls on March 5, Atlanta United played their first match at Bobby Dodd Stadium and dropped a 2-1 decision on a late own goal by Anton Walkes. The 55,297 people in attendance didn’t seem to care as they showed right away that they were worthy of an electric atmosphere. A week later, the team flew to Minnesota to play their expansion counterparts and came away with their first win in a 6-1 thrashing, helped along by a hat trick by Josef Martinez. Atlanta United would use a 4-1-3 stretch in the summer as momentum leading to their first game at Mercedes-Benz Stadium against FC Dallas in Early September. After winning that game 3-0, the club would lose only one game the rest of the year to finish in fourth place in the East at 15-9-10. In their playoff game at home against Columbus Crew SC, United would come up short in a shootout 3-1.

2018: Looking to build off their strong first season, the ATL most certainly would deliver. Following a 4-0 season-opening loss to Houston, the club would bounce back in an emphatic way by going on an eight-match unbeaten streak, spurred on by Josef Martinez and Miguel Almiron. As the ATL continued its run up the standings, Martinez kept up his fine form, scoring goals in nine straight matches and scoring 31 on the regular season, setting a record for most by a player in MLS history. After another unbeaten run of seven games, the club would only lose three games the rest of the way, ending up in second place at 21-6-7 and 69 points, just two points behind the New York Red Bulls. Throughout the second half of the year, it was reported that coach Gerardo Martino would accept the head coach position for the Mexican national team at the season’s end. Determined to send their coach there with hardware, United made quick work of New York City FC in the semifinals, 4-1 on aggregate. Martinez and Co. did not stop there as they easily dispatched the New York Red Bulls in the East final 3-1 on aggregate to claim their spot in the championship match in their second season.

2018 MLS Cup: In front of a record-smashing crowd of 73,019 at Mercedes-Benz Stadium, Atlanta United were prepared to take on the Portland Timbers for their first championship. The first half of the match was largely a cautious one as neither side could break through or get any real scoring chances. That changed in the 39th minute when Michael Parkhurst’s sliding tackle poked the ball to Josef Martinez in the penalty box, and he slid the ball home for the icebreaking goal. Following a couple of important saves by Brad Guzan, a free kick deflection from match MVP Martinez found Franco Escobar, who gave United a 2-0 lead. The Timbers were unable to get back into the game as the home team delighted their big crowd with their first MLS Cup title and sent Coach Martino out a winner.

2019: In hopes of an encore of their first championship, new coach Frank de Boer made sure that the ATL wouldn’t miss a beat. Despite slumping out of the gate with two losses and two ties, the club used a five-game winning streak through April and May in which they did not allow a single goal to get back to the upper portion of the East. Amid a steady summer, Atlanta captured their first US Open Cup championship over Minnesota United as well as the inaugural Campeones Cup defeating Club América, both titles being clinched in Mercedes-Benz Stadium, making the venue the MLS fortress. The club would use Josef Martinez’s 27 goals to cement a second-place finish of 18-12-4. Their first playoff game against the New England Revolution was a tight affair until Franco Escobar scored with 20 minutes remaining to move the club to the second round. In that game against the Philadelphia Union, it would be Julian Gressel and Martinez scoring to advance to the East Final. That’s where the run would end for the defending champions as Gressel’s early goal was offset by Nicolas Benezet’s strike and Nick DeLeon’s goal with 12 minutes left in the game to send Toronto FC to MLS Cup.


The name was chosen based on a survey of the team's supporters and used words the supporters most positively related to. 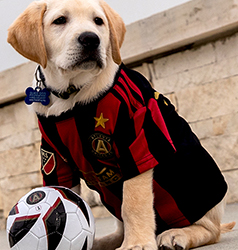 ©MMXX Tank Productions. Stats researched by Stephen Mulvoy, all information, and team names are property of Major League Soccer. This site is not affiliated with the Atlanta United F.C. or the MLS. This site is maintained for research purposes only. All logos used on this page were from Chris Creamer’s Sports Logos Page.
Page created on February 19, 2017. Last updated on August 12, 2020, at 11:05 pm ET.