1998: In front of a national television audience on March 20, the Fusion played their inaugural game as host to DC United and dropped a 2-0 decision. The Fusion picked up Colombian star Carlos Valderrama shortly after that. As the team struggled midway through the season, coach Carlos Cordoba stepped down and was replaced by Ivo Wortmann. Under Wortmann, the Fusion would improve and make the playoffs with a record of 15-17. In the playoffs, the Fusion would easily be swept by DC United.

2000: In Ivo Wortmann’s final season as coach, the Fusion would do better than the previous year, but miss the playoffs with a record of 12-15-5.

2001: New head coach Ray Hudson would bring a spark to the Fusion as they would dominate the league and sit in first place in the entire league for much of the season. After the September 11 attacks wiped out the final two weeks of the season, the Fusion claimed the Supporter’s Shield with a record of 16-5-5. In the playoffs, the club would dispatch the defending champion Kansas City Wizards in three games, 6 points to 3 for their first playoff series win. The next round would see the Fusion give the San Jose Earthquakes all they could handle before falling to a Troy Dayak overtime goal in a series tiebreaker; Little did anyone realize this would be the Fusion’s final game ever. In December, rumors began to fly that the Fusion and the Tampa Bay Mutiny would become disbanded. That would become a reality on January 8, 2002. After only four years as a team, the Fusion ceased operations because of low attendance and a bad stadium deal.


Named after the Florida heat. 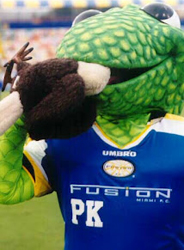 ©MMXX Tank Productions. Stats researched by Stephen Mulvoy, all information, and team names are property of Major League Soccer. This site is not affiliated with the Miami Fusion or the MLS. This site is maintained for research purposes only. All logos used on this page were from Chris Creamer’s Sports Logos Page.
Page created on July 14, 2004. Last updated on July 8, 2020, at 11:30 am ET.