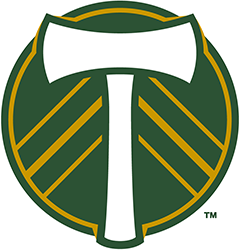 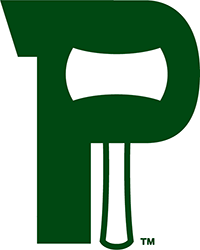 2011: On March 19, the reincarnated Portland Timbers made their MLS debut following three different Timbers clubs in the lower American Soccer Pyramid levels. The first game was a 3-1 loss to the Colorado Rapids. Their home debut came four weeks later at renovated Jen-Weld field, the converted baseball stadium that hosted Women’s World Cup matches in 1999 and 2003. In this game, the Timbers got the better of the Chicago Fire, 4-2 helped by two goals from Jorge Perlaza. Though the club would proceed to win six of their first ten matches, they would endure rough stretches and injuries to key players that kept them four points out of a playoff spot with an 11-14-9 record.

2012: The Timbers would have difficulty living up to expectations, winning only three times in their first twelve games, and couldn’t keep up the pace in the West. A coaching change in the summer didn’t help the club as they finished 8-16-10 and in eighth place in the West.

2014: The season did not start well for the Timers as they endured an eight-match winless streak. Over the summer, the club acquired Premier League veteran Liam Ridgwell from West Bromwich Albion. His presence, along with Diego Valeri’s 11 goals, helped the Timbers back up the standings as they ended the year with a 4-1-3 stretch, but a 12-9-13 record wasn’t enough as they ended up one point behind Vancouver for the last playoff spot.

2015: Momentum from the previous year’s hot finish seemed tempered as the Timbers began the season with three straight draws and a stoppage-time loss to Vancouver. The tough start would lead to an inconsistent spring for the club, but a four-game winning streak in May and June was the key to them leaping back in contention and staying in it. Helped along by Fanendo Adi’s 18 goals, the Timbers ended the year winning three straight to finish in third place at 15-11-8. In the knockout game at home against Sporting Kansas City, the two teams went to extra time tied 1-1 as Kevin Ellis’ goal appeared to end the Timbers’ season. However, Maximilliano Urruti scored two minutes from full time, and the clubs went to a back and forth shootout, with Portland prevailing 7-6 and surviving a double post shot from SCK’s Saad Abdul-Salaam which would have eliminated them. With renewed confidence, the Timbers knocked out Vancouver Whitecaps FC 2-0 to move onto the West Final to face FC Dallas. In that round, the green team made easy work of the Hoops, defeating them 5-3 on aggregate.

2015 MLS Cup: Over 1,000 Portland supporters traveled to Columbus, Ohio, to cheer on the Timbers against Columbus Crew SC in their first MLS Cup. Just 27 seconds into the match, Diego Valeri forced Crew goalkeeper Steve Clark into a fatal mistake with his nonchalance and kicked the ball into the goal. An insurance goal wouldn’t take long to follow as Rodney Wallace headed in a cross in the seventh minute. The Crew would get one back in the 18th minute on Kei Kamara’s rebound on a mess in the penalty area. The second half was all Timbers’ possession as they missed several chances to salt the game away with another goal, but it did not matter as they ran the clock out, winning 2-1 and earned the first MLS championship for the Rose City. Valeri’s backbreaking goal in the opening minute gave him MVP honors.

2016: After beating the Crew on Opening Day in a rematch of the championship game three months earlier, the Timbers’ title defense turned into a hangover as they were unable to record a road win all year, which wound up costing them in the end. The Timbers did have a nine-match unbeaten streak through May and July to put themselves back into playoff conversation, but their excellence at home was overshadowed by their futility on the road as they finished out of the playoffs in seventh place with a record of 12-14-8, two points behind Real Salt Lake.

2017: Determined to return to the pedestal after a rough title defense, the Timbers started well, winning five of their first nine matches. Diego Valeri’s five goals in that stretch were helped along by teammates Diego Chara and Fanendo Adi. After a rough stretch between early May and mid-July where they only won two games and slid near the bottom of the West, the Timbers resumed a torrid pace, losing only three times and winning eight to take the top spot in the West at 15-11-8, edging out Seattle Sounders FC on a tiebreaker. After a scoreless first playoff leg against the Houston Dynamo, Dairon Asparilla scored a go-ahead goal in the first half of the second leg. But the Dynamo would score goals from Dylan Remick and Mauro Manotas to eliminate the Timbers.

2018: The beginning of the year was not easy for the Timbers as they came out of the gate with a five-match winless streak. That would turn out to be a mere bump in the road as the team did not lose a game between April 14 to August 4, which included a six-game winning streak to propel themselves to the top of the West. But then came a tricky 3-6-2 stretch for the Timbers, which brought them back down the standings. The team was able to shake the cobwebs at the end of the year to end up fifth in the West at 15-10-9. Leading the way for the club was the Argentine combo of Diego Valeri and Sebastien Blanco, both of whom finished the season with ten goals. To start the playoffs, the Timbers would hit the road to FC Dallas on Halloween for their Knockout Round match. Two goals from Diego Valeri, one from a free-kick and another on a rebound, helped the visitors to a 2-1 win, withstanding a consolation FCD goal. Taking on Seattle Sounders FC in the next round, the Timbers came away with a 2-1 win at home and holding a 1-1 lead in the second leg; the club looked to be moving on via away goals. But Raul Ruidiaz had other ideas as he scored a stoppage-time goal to send the series to extra time. A go-ahead goal by Portland’s Darion Asprilla was offset by a penalty kick goal by Seattle’s Nicolas Lodeiro, and a penalty shootout became necessary. The Timbers took care of that 4-2 to head to the West Finals. After a scoreless first leg against Sporting Kansas City, the Timbers won the second leg 3-2 to stamp their ticket to their second MLS Cup in four years.

2018 MLS Cup: For the second time, the Timbers would head to the MLS championship match on the road, but this time, it would be at Mercedes-Benz Stadium in Atlanta against ATL United in front of 73,019 people. The visitors did all they could to block out the pro-Atlanta crowd, but by the 39th minute, the home team went ahead on a goal by Josef Martinez off a sliding challenge from Michael Parkhurst. An insurance goal from Franco Escobar in the 54th minute was the dagger for the Timbers as a 2-0 defeat brought a disappointing end to an impressive playoff run.

2019: Perhaps still reeling from their loss in MLS Cup, the Timbers would come crawling out of the gate, losing five of their first six matches to wind up in last place in the overall table. The sluggish play would continue through May as they could not seem to find something that worked. A six-match unbeaten run helped the Timbers climb back into playoff contention. A late push, which included a 1-0-3 run to finish the regular season, would help them to the sixth seed in the West. Brian Fernanze and Jeremy Ebobisse each helped the team with eleven goals. The Timbers’ remarkable turnaround would be unfulfilled at the end as a last-minute 2-1 loss to Real Salt Lake in the first round ended their season.


Timbers dates back to Portland's NASL team, which was owned by a timber company and named for Oregon's timber industry.

Goalkeeper of the Year: (1) 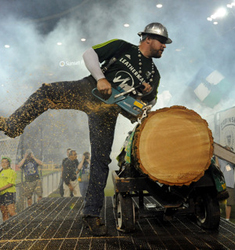 ©MMXX Tank Productions. Stats researched by Stephen Mulvoy, all information, and team names are property of Major League Soccer. This site is not affiliated with the Portland Timbers or the MLS. This site is maintained for research purposes only. All logos used on this page were from Chris Creamer’s Sports Logos Page.
Page created on March 22, 2012. Last updated on July 11, 2020, at 11:05 pm ET.