2009: On March 19th Professional Soccer made a triumph return to Seattle, as the Seattle Sounders, named after Seattle NASL team made it’s debut with a 3-0 win over Red Bull New York, who played in the previous years MLS Cup. Scoring the first goal for the Sounders was Fredy Montero. The Sounders would use their huge home field advantage to three straight wins to start their inaugural season as they proved early on they would not be a typical expansion team. They would have almost the same amount of ties and wins and they would surge to the playoffs with a record of 12-7-11. During the season, the Sounders would not sink lower than fifth place. In the first round, the Houston Dynamo used a Brian Ching goal in extra time of the second leg to eliminate the Sounders. In the midst of the season, the Sounders won the US Open Cup, replicating the accomplishment of the Chicago Fire.

2010: Unable to match the hot start from their inaugural year, the Sounders spent much of the season before the World Cup break in the bottom half of the West. Eventually, the team would heat up again and use a seven match unbeaten streak and a five game winning streak to propel themselves back to the playoffs with a record of 14-10-6. Their stay in the playoffs would be brief as the LA Galaxy beat them 3-1 on aggregate. On a side note, the Sounders successfully defended their US Open Cup, beating the Columbus Crew in the final.

2011: The Sounders would start the season 0-2-2. That would only prove as a warm-up act for the rest of the season as the Sounders played much better during the spring and summer. There were no long wining streaks, but there were no long losing streaks either as the Sounders used a 5-0-2 run during the summer and a 7-2-0 stretch ending the year to finish second in the West with a solid record of 18-7-9. But in the playoffs, they were upset by Real Salt Lake 3-2 on aggregate.

2012: Looking to continue adding to their impressive resume after three seasons as a club, the Sounders won seven of their first nine matches to start the year to challenge the Earthquakes for the top spot in the West early on. But a nine game winless streak brought the club back to earth as they struggled to regain their early form and finished the season 15-8-11 and in third place. Against Real Salt Lake in the playoffs, the Sounders finally advanced for the first time as Mario Roberto Martinez scored in the 81st minute of the second leg in Utah for the surprise result. But their dreams of a first MLS Cup appearance were vanquished against the Los Angeles Galaxy, going quietly 4-2 on aggregate.

2013: The Sounders struggled out of the gate going winless in their first five before surging with seven wins in their next ten. On August 3, the Sounders transferred Clint Dempsey from Tottenham Hotspur and his arrival sent shockwaves through MLS. As for the Sounders, he helped them win eight of their next twelve to help qualify for the playoffs in fourth place at 15-12-7. A 3-0 win over the Colorado Rapids on goals by Brad Evans and Eddie Johnson extended their season. Unfortunately for the team, their rivals to the south, the Portland Timbers ended their season in the next round 5-3 on aggregate.

2014: Continuing to knock on the door of their first domestic championship, the Sounders began the season on a 7-2-1 stretch, which included a five match winning streak. The double trouble tandem of Obafemi Martins with 17 goals and Clint Dempsey with 15 goals made the club very tough to beat. The Sounders would clinch their first Supporter’s Shield, finishing on top of MLS at 20-10-4. In addition, they would defeat Philadelphia in the US Open Cup final on September 16, their fourth such title. In the first round of the playoffs the Sounders snuck by FC Dallas 1-1, using an away goal in the first leg to move on. That same tiebreaker would sink the Sounders in the conference final as the LA Galaxy beat them 2-2, the visitors’ goal in the second match being the difference and again denying Seattle a spot in MLS Cup.

2015: The Sounders started the season off well, going 5-1-1 out of the gate before they would run into trouble. During a US Open Cup match in mid-June, Clint Dempsey lost his temper and tore up the referee’s notebook, leading to a six-match suspension in the tournament and a three-match ban in MLS play. This incident would begin a nosedive for the club as a 3-9 stretch in the summer, helped also by an eight-match unbeaten streak to finish the year, brought them to fourth place at 15-13-6. Against the LA Galaxy in the Knockout Round, the Sounders kept up their form and eliminated the defending champs 3-2. After beating FC Dallas in the first leg of the next round, the Sounders appeared headed to the next round after Chad Marshal headed in a stoppage time goal. But FCD had other ideas as Walker Zimmerman scored a minute later and the Sounders lost the ensuing penalty shootout 4-2.

2016: After a tough end to their season, the Sounders pressed forward. But results were not in their favor early on, losing three in a row out of the gate and continuing to have difficulty putting win together throughout the spring. On July 24 after a 3-0 loss to Sporting Kansas City, the Sounders were 6-12-2, in danger of missing the playoffs for the first time and Sigi Schmidt parted ways with the team. His replacement, Brian Schmetzer, brought a breath of fresh air to the club as Jordan Morris and Clint Dempsey picked up their game and Uruguayan Nicolas Lodeiro scored four goals upon his arrival. Winning streaks of three in August and four in September/October helped the Sounders to a fourth place record of 14-14-6. In their first playoff game against Sporting Kansas City, the two teams were scoreless through 88 minutes until Nelson Valdez scored the winner. The team then stunned Supporter’s Shield-winning FC Dallas with a 4-2 aggregate victory in the next round and with a 3-1 win over the Colorado Rapids in the West Finals, the Sounders finally broke through to MLS Cup.

2016 MLS Cup: Emanating from the chilly shores of Lake Ontario at BMO Field was the Sounders’ first MLS Cup game going against Toronto FC who were also in their first championship game appearance. The first half was mostly TFC as they had their chances and possessed the ball better than the Sounders, but neither team was able to put the ball in the net. Toronto continued to press forward as Seattle defended, but a goal never came as regulation ended 0-0. The home team had a big chance to break through in the 108th minute when Jozy Altidore headed the ball towards the net, but Stefan Frei stretched as far as he could to make the save and the two teams headed to a scoreless shootout with the Sounders failing to make a shot on goal. In the penalty kicks, the teams were tied at 4 in the sudden death segment when Toronto’s Justin Morrow missed and Seattle’s Roman Torres scored to make the final score in the shootout 5-4 in favor of the Sounders for their first MLS Cup win. Frei was awarded MVP with seven saves and his game saving stop in extra time.

2017: Now that they finally captured the one piece of hardware they were looking for, the Sounders were on a mission to repeat. It didn’t start out very well as the club only won one of its first six matches to start the campaign. A three game losing streak in May had some supporters on the edge of their seats. But sure enough, the Sounders embarked on an unbeaten summer, going 6-0-3 and losing only two games in the fall to finish in second place in the West at 14-9-11. The club was helped along by Will Bruin’s 11 goals and Clint Dempsey, who returned after missing the tail end of 2016 with an irregular heartbeat, added 12 of his own to help lead the charge. To start the playoffs, the Sounders and the Vancouver Whitecaps played a scoreless first leg before Dempsey scored twice in the second leg to move the Sounders on. The team then made very quick and easy work of the Houston Dynamo in the West Final, beating them 5-0 on aggregate, while keeping their playoff shutout streak of 467 minutes intact.

2017 MLS Cup: One win away from back-to-back titles, the Sounders found themselves returning to BMO Field for a rematch with Toronto FC. No doubt feeling spurned by their narrow loss the year before, TFC thoroughly dominated the match in the first half, bombarding the goal with six shots, all of which were turned away by Stefan Frei. Joevin Jones’s shot in the 30th minute was the first shot on goal by the Sounders in MLS Cup after failing to register one the year before. The visitors could not hold fort much longer as Jozy Altidore’s goal in the 67th minute put Toronto ahead and ended Seattle’s 714-minute playoff shutout streak. The dagger in the Sounders’ title bid came in the 94th minute on Victor Vazquez’s goal to give the crown to the home team.


Named in honor of Puget Sound, which is located in Seattle, name originally used by Seattle's NASL team. 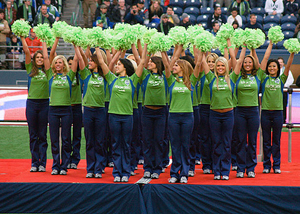 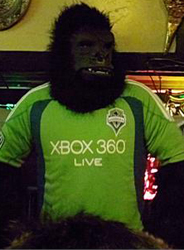 ©MMXVII Tank Productions. All information, and team names are property of Major League Soccer. This site is not affiliated with the Seattle Sounders F.C. or the MLS. This site is maintained for research purposes only.
All logos used on this page were from Chris Creamer’s Sports Logos Page.
Page created on August 17, 2009. Last updated on February 20, 2017 at 11:20 pm ET.