1996: On April 13th, The Mutiny were welcomed to Tampa with their inaugural game against the New England Revolution. The result was a 3-2 Mutiny victory. There were many stars on the team, including Carlos Valderrama, Steve Ralston, and scoring machine Roy Lassiter, who scored a record 26 goals in the season. Thomas Rongen also coached the team. As for the season, the Mutiny claimed the best record in the league at 20-12 and were the first winners of the Supporter’s Shield. In the playoffs, they would be taken to a third game by the Columbus Crew before eliminating them. In the conference final, though, the Mutiny’s remarkable season would come to an end as they were swept by eventual champions DC United.

1997: In a season that saw coach Thomas Rongen leave to take the New England Revolution’s vacancy, the Mutiny would replace him with John Kowalski. Under him, the Mutiny would continue to play well and finished the season with a record of 17-15. But the Columbus Crew would get revenge on the Mutiny for the previous year by sweeping them. After the season, Kowalski resigned from the club.

1998: In addition to getting a new coach, Tim Hankinson, Star Carlos Valderrama would leave his original club to join their new Florida counterparts, the Fusion. As a result, the Mutiny would struggle through the season, finishing with a record of 12-20 and miss the playoffs for the first time.

1999: Looking to rebound from their disappointing year, the Mutiny would get back Carlos Valderrama, and statistically and record-wise, didn’t help the team much, but even with a record of 14-18, the Mutiny would make a return to the playoffs. But like two years ago, they would be swept by the Columbus Crew in the first round.

2001: Coach Alfonso Mondelo replaced the fired Tim Hankinson, and the Mutiny would struggle mightily. In the middle of the season, Mondelo was fired, and Perry Van DerBeck attempted to revive the struggling franchise. On September 4th, the Mutiny would drop a 2-1 decision to the Columbus Crew, and their record stood at 4-21-2. Unfortunately, that would be the last game the Tampa Bay Mutiny would ever play as the September 11th attacks on America canceled the rest of the season. The Mutiny, along with the Miami Fusion, ceased operations on January 8, 2002, because they couldn’t find local ownership, and the horrible season seemed to drive fans away.


Named "Mutiny" to keep in touch with the NFL Buccaneers. 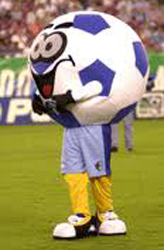 ©MMXII Tank Productions. Stats researched by Stephen Mulvoy, all information, and team names are property of Major League Soccer. This site is not affiliated with the Tampa Bay Mutiny or the MLS. This site is maintained for research purposes only. All logos used on this page were from Chris Creamer’s Sports Logos Page.
Page created on July 19, 2004. Last updated on March 19, 2012 at 12:30 am ET.