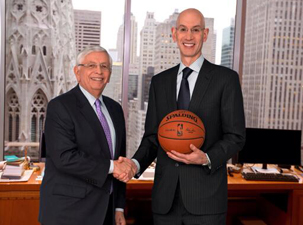 Profile: Adam Silver was born on April 25, 1962 in New York City, he was raised in the Westchester County suburb Rye, New York and began following the New York Knicks at an early age. After graduating Rye High School Silver would attend Duke University, completing his Bachelor of Arts in 1984. Over the next two years, Adam Silver worked as legislative aide for U.S. Congressman Les AuCoin from Oregon, he would then earn his law degree from University of Chicago in 1988.

After Law School, Adam Silver worked as a Law Clerk to Judge Kimba Wood, a federal judge for the United States District Court for the Southern District of New York. Silver later served as a litigation associate at Cravath, Swaine & Moore, a law firm in New York, before going to work for the NBA in 1992.

Adam Silver was named to TIME Magazine and CNN’s list of Global Business Influential People; he has also been named to The Sporting News’s “100 Most Powerful People in Sports” on multiple occasions before taking the post of Commissioner in 2014. On February 1, 2014 Adam Silver replaced his longtime boss David Stern as Commissioner of the NBA.

Adam Silver faced his first crisis three months later when Los Angeles Clippers Owner Donald Sterling was recorded making racial comments. The Clippers who were facing the Golden State Warriors in the first round of the playoffs. Silver acted swiftly and boldly and banned Sterling for life and later removed him from ownership in the league. Sterling was also smacked with a $2 million fine. Adam Silver was largely applauded for his actions in the Sterling affair and it showed he was different than David Stern who often overlooked his owners’ bad behavior.

Most importantly Adam Silver gained admiration from the players over his quick actions in the Donald Sterling, which is expected to help the league when it comes time to negotiate a new Collective Bargaining Agreement in 2017.