1995/96: The NBA and Canada were always a natural match, as James Naismith, the famed inventor of the sports, was a Canadian. However, after the Toronto Huskies folded after the NBA’s first season in 1947, it took nearly 50 years for the NBA to return to the Great White North, as the Vancouver Grizzlies were on of two Canadian teams to join the league in 1995. The Grizzlies would get off to a solid start stunning the Portland Trailblazers on the road 92-80 on November 3rd. Two nights later, the Grizzlies had a successful home debut at General Motors Place by beating the Minnesota Timberwolves 100-98. However, the Grizzlies would lose their next 19 games, as they went on to finish in last place in the Midwestern Division with an NBA worse record of 15-67, as only four Grizzlies averaged ten ppg, with Greg Anthony leading the way with a mediocre 14.0 ppg. The Grizzlies and the NBA’s other Canadian expansion team, the Toronto Raptors would split two games.

1996/97: The Grizzlies continued to struggle in their second season despite solid play from Shareef Abdur-Rahim, who averaged 18.7 to leave the Grizzlies who again posted the worst record in the NBA at 14-68. However, due to a rule that the Grizzlies could not win the draft lottery, they had no hopes of landing Wake Forrest star Tim Duncan in the draft and instead had to settle for Antonio Daniels, with the fourth overall pick.

1997/98: The Grizzlies made some strides under new coach Brian Hill as they finally escaped last place by finishing sixth with a record of 19-63. Leading the way in scoring again was Shareef Adur-Rahim, who averaged 22.3 ppg. Also showing promise was Bryant Reeves the Grizzlies first-ever draft pick who continued to show improvement with 16.3 ppg and 7.3 rebounds per game.

1998/99: Mike Bibby had a solid debut as he posted 13.2 points and 6.5 assists per game and was named to the All-Rookie First Team. Shareef Abdur-Rahim continued to improve posting a career-high 23.0 ppg and 7.5 rpg. However, a knee injury limited Bryant Reeves to just 25 games as the Grizzlies struggled again returning t last place with an NBA worst record of 8-42 in a lockout-shortened season.

1999/00: Through their first few seasons, the Grizzlies had drawn substantial crowds, but after the lockout, they were hit hard as fans in Vancouver seemed to reject the league after the ugly squabbling wiped out half of a season. Things would go bad to worse on draft day as Steve Francis selected second overall refused to play for a Canadian Team, forcing the Grizzlies to package him in a three-team 11-player deal with the Houston Rockets and Orlando Magic. In return, the Grizzlies would receive Michael Dickerson, Othella Harrington, Brent Price, and Austin Carr, along with a couple of draft picks. Francis would go on to win the Rookie of the Year with Rockets while the Grizzlies drowned in red ink, finishing in last place again with a record of 22-60, as rumors of a move south began to circle the team.

2000/01: Entering their sixth season rumors of a move to the U.S. became a reality as Owner Michael Heisley, decided that it was time for the Grizzlies to move on. After five dismal seasons had given the team-low morale and decreasing support in the community, which put the team in debt. On February 19th, with the Grizzlies buried in last place with a record of 16-36, Heisley traveled to Memphis to discuss a deal between the city and the team, as he applied to move. The NBA would grant the team permission to relocate as the NBA in Vancouver was determined to be a failure after just six years, in which the NBA hampered any chance of them getting early success with their draft lottery rule. The Grizzlies would go on to finish in last place again with a record of 23-59. In their final two games against the Toronto Raptors, the Grizzlies would be swept as they had a 4-7 record in regular-season games against their Canadian rival. In their last game in Vancouver on April 14th, the Grizzlies would be beaten by the Houston Rockets 100-95 as Steve Francis was booed throughout. However, in their final game in Golden State, the Grizzlies would beat the Warriors 95-81 to avoid another 60-loss season. Though the Grizzlies only last six-year hardly giving them a chance to form a strong fan base, it is unlikely that Vancouver will ever get another NBA team after the failures of the Grizzlies.


Nickname Grizzlies was chosen after Mounties was abandoned following objections by the Royal Canadian Mounted Police.

Defensive Player of the Year 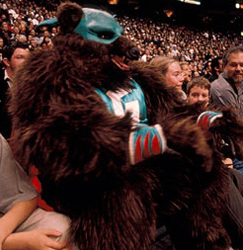 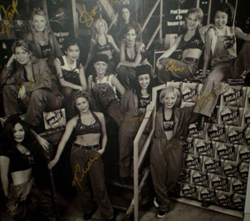 ©MMXI Tank Productions. Stats researched by Frank Fleming, all information, and team names are property of the National Basketball Association. This site is not affiliated with the Vancouver Grizzlies or the NBA. This site is maintained for research purposes only. All logos used on this page were from Chris Creamer’s Sports Logos Page.
Page created on June 18, 2003. Last updated on April 29, 2011 at 1:20 am ET.