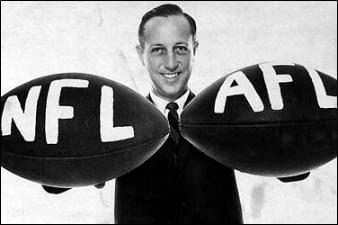 Profile: Alvin Ray Rozelle was born March 1, 1926 in South Gate, Calif. The older of 2 boys, his father had run a grocery store, but it failed during the Depression and he worked the rest of his days for Alcoa. Nicknamed Pete by an uncle, Rozelle grew up in Lynwood, a suburb of Los Angeles, and played basketball and tennis at Compton High School. After graduating, Rozelle served in the Navy, including time on an auxiliary tanker in the Pacific, from 1944 to 1946.

When the NFL expanded westward in 1946, the Cleveland Rams moved to Los Angeles. They practiced at Compton Junior College, where Rozelle was a freshman. He helped out the team’s publicity department, and met Tex Schramm, then a Rams executive.

After Compton J.C., Rozelle attended the University of San Francisco, where he became USF’s publicity director for athletics. He graduated in 1950 and took on a second job, assistant athletic director. Two years later, he was hired by Schramm to be the Rams’ PR director. In 1955, he left to become a partner in a firm that did publicity work for the 1956 Olympic Games in Melbourne, Australia. He returned to the Rams as general manager in 1957.

On January 26, 1960, Rozelle was voted NFL commissioner after seven days of balloting. He was told of his election in the bathroom, and when he emerged, he jokingly told owners, “I come to you with clean hands.” Rozelle was chosen as a compromise after owners could not agree on 2 other candidates.

At the time of his election to commissioner the NFL had 12 teams and were about to face a challenge from an upstart 8-team league known as the American Football League. Almost immediately the NFL decided to expand to 14 teams adding the Dallas Cowboys in 1960 and Minnesota Viking to cut off possible in roads to the new league (AFL) taking a foothold in untapped markets.

In one of his first moves he moved the league’s offices from suburban Philadelphia to midtown New York that year and set to work on building a television package. Bell had gotten a national TV deal for the NFL’s championship game, and Rozelle went a big step further. He helped to push a bill through Congress that legalized single-network contracts for pro sports leagues and negotiated a league-wide agreement that replaced the 12 teams’ separate TV packages. In 1962, CBS paid $9.3 million for two years to televise NFL games, an agreement that spawned much larger contracts. Smaller markets rejoiced. “What Pete Rozelle did with television receipts,” Packers coach Vince Lombardi said, “probably saved football in Green Bay.”

In early 1963, Rozelle faced one of his biggest challenges: a gambling scandal that tore at the league’s image. For three months, he gathered evidence. Then in April he suspended 2 of the league’s brightest stars, Paul Hornung and Alex Karras, for betting on games. The action drew widespread approval, from owners, sports writers, fans and even Lombardi, Hornung’s coach. “He gained once and for all,” said Schramm, “everybody’s complete respect.”

Later that year, though, he was widely criticized for allowing games to be played just two days after the assassination of President John F. Kennedy. Later, he said, “It was the most regrettable decision I ever made.”

By 1966 the AFL started to become a more legitimate league, and started taking players away from the NFL. This led Rozelle into talks for a merger, the agreement gave the leagues a common draft, made both leagues respect the others contracts that controlled what owners feared would become sky rocketing salaries. However, its most important product was an end of the year Championship game that would become the biggest yearly sporting event in the world.

When the first AFL-NFL Championship Game was played few noticed as the green Bay Packers beat the Kansas City Chiefs easily. However just 2 years later the New York Jets stunned the world by beating the Baltimore Colts turning the game now known as the Super Bowl into an event in the process.

After the Jets upset win in Super Bowl III the merger was completed with all ten teams joining the now 16-team NFL under the NFL logo. In 1970 the first year the merger took effect the two once rival league were named conferences with three former NFL teams joining the AFC to give both Conferences equal footing at 13 teams.

TV ratings continued to spiral upward, and in 1970 the league certified its appeal with the debut of ABC’s Monday Night Football. Rozelle pushed the Monday night idea hard on the networks, and ABC – last in the Nielsen ratings – took the gamble and watched it succeed beyond all expectations. Today, only CBS’ 60 Minutes has been on the air longer. “There are a lot more TV sets in use on Monday night than on Sunday afternoon,” Rozelle said. “We’re undoubtedly getting a lot of new fans.”

In 1974 the NFL faced its first work stoppage when players held out of preseason camps. However, Rozelle was able to forge a settlement without the loss of any regular season games. Shortly thereafter several stars bolted for another rival league known as the World Football League. However the league would fold quickly and the stars would return.

In 1980 Rozelle would have a legal face off with Raiders owner Al Davis who was attempting to move his team from Oakland to Los Angeles. Rozelle blocked the move, but Al Davis would get permission to move after 2 years of ugly public court ranglings. The affair would leave the NFL powerless in future franchise shifts.

The same year the NFL lost its long legal battle with Davis, saw it lose 7 games to a player’s strike as players wanted free agency, and an improved pension plan. Eventually the players would get the pension but would not get free agency as an NFL season was nearly ruined.

Once again a rival league would spring up playing in the fall the USFL would sign several players once their contracts expired, while out bidding the NFL for college stars. Originally the upstart league just played in the spring, but when plans were made to have it become a fall sport in 1986, Rozelle buckled down, saying any network that showed their games would not be permitted to cover the NFL. ABC, which owned Monday Night Football, chose to terminate its contract with the USFL, which led to the league’s collapse. The USFL would bring a $1.6 billion antitrust suit against the NFL that it won. However, the court would only award the USFL $3.

Shortly thereafter-another work stoppage in 1987 led to the use of replacement players for 3 weeks, as the NFL continued to hold firm over the Players association. This time the players would get limited Free Agency in what was known as Plan B. (Plan B free agency would allow a limited number of players each season to negotiate with other teams.)

Pete Rozelle would retire in 1989 after nearly 30 years running the league. Four years after being inducted in the Hall of Fame he helped establish in 1963. Rozelle, who died in 1996 from a Brain Tumor, would leave beyond a grand legacy making him the Commissioner of all Commissioners “Moving the NFL from the back page to the front page,” New York Giants owner Wellington Mara said. “From daytime to prime time.” Following his death the Super Bowl MVP Trophy was renamed in his honor.