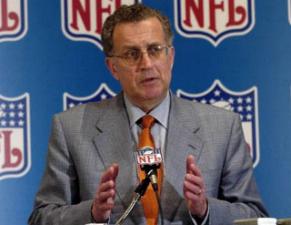 Profile: Born on November 24, 1940 in Jersey City, NJ, Paul John Tagliabue took office on November 5, 1989, succeeding Pete Rozelle, who served as NFL Commissioner from 1960 to 1989. In high school in Union City, NJ, he was an honor student and highly recruited basketball player. He received an athletic scholarship from Georgetown University, where he majored in government and was captain of the 1961/62 basketball team. He also was president of his senior class, a Rhodes Scholar finalist and a Dean’s List honor graduate in 1962. Tagliabue attended New York University School of Law on a public-service scholarship. He was an editor of the law review and graduated with honors in 1965.

Tagliabue first became associated with the NFL when he was hired by Covington & Burling, a Washington D. C. law firm, the NFL’s principal outside counsel at the time. While working for Covington & Burling represented the NFL as an attorney in important areas, including television, expansion, legislative affairs, franchise moves, labor and antitrust cases.

By 1986 Paul Tagliabue was a full partner with powerful law firm and was representing the NFL in the $1.6 billion antitrust lawsuit brought by the USFL. The NFL would lose the case, but thanks to the shrewd case presented by Tagliabue the USFL was only awarded $3. When the NFL needed to find a replacement for outgoing Commissioner Pete Rozelle, Tagliabue was a logical choice being he was already familiar with all league affairs.

Taglibue’s first work began in building developmental leagues for the NFL. Establishing a spring league known as the World League of American Football the league acted as a training ground for players trying to make NFL rosters. In addition Tagliabue would put expansion on the table.

The first major issue for Tagliabue came up in 1992 when a court ruled the NFL’s Collective Barging Agreement with players invalid because of their anti free agency rules. The ruling gave the players free agency, and had the NFL in a panic that the WLAF was put on hiatus ad expansion was delayed. However, it would only be a temporary road block as Tagliabue was able to get a new agreement with both Free Agency that made the players, while establishing a salary cap that kept competitive balance.

The WLAF resumed operations, and was renamed NFL Europe, and expansion went on with Charlotte and Jacksonville both receiving teams and grand new stadium deals. This would make other owners jealous and led to more franchise relocation that the NFL continued to be powerless to stop.

In 1995 the Raiders moved back to Oakland as the Rams moved to St. Louis leaving Los Angeles, the second largest television market without a team. However, that did not stop television deals from breaking through the stratosphere as the NFL signed billion dollar deals.

Another move in 1996 threatened to throw the league in turmoil as the city of Cleveland vowed to fight the NFL at all costs to prevent the Browns form moving to Baltimore. However, Tagliabue stepped in and negotiated a compromise where the city of Cleveland would get an expansion team and a new stadium funded by the league, while keeping the Browns history. Meanwhile the current players would be allowed to move to Baltimore establishing a new franchise. The need for stadiums would see the Oilers shift to Nashville, and has made NFL franchises and the cities that hold them some of the most valued comities.

After the Browns resumed play the league knew it had to expand again to get to an even 32 teams. Originally plans were to place the team in Los Angeles, but not even Tagliabue could broker a deal between feuding politicians in LA, and the NFL was forced to go to plan B, giving Houston which presented a flawless bid a team that began play in 2002.

Paul Tagliabue’s final year in office may have been his busiest, as he made sure he handed off a healthy league to his successor Roger Goodell. First he secured a new multi-year billion dollar television deal, then he continued the NFL’s long lasting labor peace by hammering a deal at the 11th hour, with an impassioned speech, that help the league keep it’s Salary Cap, and Revenue sharing plans in tact.

After leaving office, Paul Tagliabue remained an advisor to the NFL acting as an arbitrator in the New Orleans Saints bounty gate case.

©MXIV Tank Productions. This site is not affiliated with the National Football League. This site is maintained for research purposes only. Page created on August 26, 2002. Last updated on October 2, 2014 at 12:20 am ET.