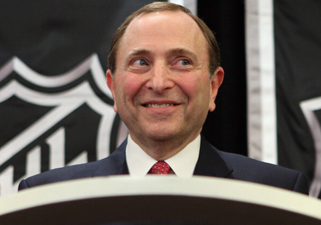 Profile: Born in Queens, New York on June 2, 1952 Gary Bettman became the first Commissioner in the NHL after the role of NHL President was restructured in 1993.

Bettman a lawyer by trade, worked as a senior executive in the NBA league office for 12 years before joining the NHL, was an unpopular choice among hockey traditionalist, who charged from the start that making money, and not the love of the game was motivating Gary Bettman. Some also said the commissioner was trying to “Americanize” the game and didn’t appreciate the place hockey occupied in Canada’s culture.

Among his first decisions was to rename the NHL’s conferences and division to carry geographical names instead of the names of NHL pioneers. Expansion, which began under President John Ziegler, continued as the league grew from 24 to 30 teams by 2000. Gary Bettman also had to deal with labor strife within his first few years in office as the owners who were unhappy with the 1992 CBA, voted to the lock the players out at the start of the 1994/95 season.

The lockout which wiped out half of the 1994/95 season was also poorly timed as the 1994 Playoffs, which were among the most exciting in NHL history helped the league land a National Television Contract with the Fox Network. Getting a National television Contract was a priority for Bettman, and the lockout got its new network partnership off to a bad start.

During Gary Bettman’s tenure the NHL became a global sport as for the first time preseason games were played in Europe and regular season games in Japan, as the NHL started to shut down their season for a few weeks during the Olympics so their players could play in the Winter Games starting in 1998. During this global outreach the NHL All-Star Game format was changed to have North American born players taking on European Players. The format that had great interest at first quickly grew tiresome and the East vs. West format would be returned after 5 years.

In an attempt to draw more fans Gary Bettman has been at forefront of rule changes that have changed how the game is played, changing overtime to 4-on-4, and awarding one point to teams that lose in overtime have not gone over well with traditionalist.

As with other professional sports economics became a major issue during the Bettman era as teams in smaller markets were forced to move. This especially angered Canadians as two Canadian teams moved to the United States. Meanwhile the six teams that remained in Canada have struggled to compete as since Bettman took over as Commissioner in 1993, only one Canadian team has won the Stanley Cup, while no Canadian teams made the finals for a ten year period ending in 2004.

While the NHL left some of their loyal Canadian fans they tried to establish new fans in the Southern United States, as Dallas, Anaheim, Miami, Phoenix, Carolina, Nashville, and Columbus all got NHL franchises for the first time while the league returned to Denver, Atlanta, and Minnesota, growing from 24 teams in 1994 to 30 in 2000. While expanding, the NHL realigned itself going from four to six divisions in 1998. However in some of the new market the teams have struggled to establish a strong fan base, as critics charged the NHL expanded to fast, hurting its financial solvency.

In 2004 the league found itself in another lockout as the owners wanted the players to accept a salary cap, and revenue sharing to help struggling teams like the Los Angeles Kings, Pittsburgh Penguins, Ottawa Senators, and Buffalo Sabres, who all declared bankruptcy. Unlike the 1994 lockout this time Bettman was willing to sacrifice an entire season, and that is exactly what ended up happening as a deal was unable to get done, forcing the NHL to become the first league to lose an entire season to a work stoppage. However, the owners and Bettman were not going to blink and eventually a deal was done capping salaries capped player salaries at 54% of league revenues, meaning the amount of the cap can go up or down annual based on how well the league was doing.

When the dust settled the NHL had to try and win back fans, Gary Bettman devised some ideas to speed up the game by allowing two line passes, while enforcing holding, and making it illegal for players to deliberately send the puck into the stands. Bettman also eliminated ties, adding a shoot out at the end of the five minute overtime during the regular season. However, the lockout caused significant damage, as the league could not get a big deal from ESPN, and had to strike out and find a new American cable partner, his choice ended up being a peculiar one in the Outdoor Life Network, which was available on a fraction of the cable systems that ESPN had. While OLN had big plans for the NHL, eventual rebranding their network to Versus, it still has hurt hockey’s exposure, and television ratings, as there was a 1.1 rating during Game 3 of the 2007 Stanley Cup Finals between the Anaheim Ducks and Ottawa Senators, lowest in NBC broadcasting history. Elsewhere the news was better on television as the NHL began broadcasting on its own network, while allowing greater access to games over the internet and social media than other sport leagues at that point.

Hoping to bring more interest to the sport, Gary Bettman made rules to increase offense, as knocking the puck over the board now became a two minute delay of game, as the goalie was limited to the area in which he could control and touch the puck. The NHL also began to crack down on clutching and grabbing calling more penalties for interference. In addition to overtime rules were adjusted again, with a shootout taking place if the game remained tied after a five minute overtime period of 4-on4 hockey. This eliminated ties and while trying to draw new fans continued to turn off traditionalist, who felt that Gary Bettman was doing too much to change the NHL. A sense that would continue as he again changed to All-Star Game format by having two pre-selected captains choses players from a pool of all-stars, tarnishing the NHL’s All-Star showcase as a sideshow for the season.

As the league continued to move forward, Commissioner Gary Bettman increased the league’s global outreach, with the Los Angeles Kings and Anaheim Ducks starting the 2007/08 season in London, which paved the way for games all throughout Europe to open the season annually. In North America, the idea of outdoor games would take foothold, as the Buffalo Sabres hosted the Pittsburgh Penguins on New Year’s Day in 2008, as the game broadcast on NBC was the highest rated NHL game in a decade, leading the event to become one of the NHL’s most popular annual events. The gamble to put the NHL on the Versus would also begin to pay off as the channel evolved intothe NBC Sports Network as the league increased its partnership with Comcast, who had purchased NBC, hoping to build its Sports Network off the NHL, which in 2012 had all playoff games aired Nationally in the United States for the first time.

Just as things were starting to improve for the NHL, trouble was on the horizon as another Collective Bargaining Agreement needed to be signed for the 2012/13 season. After the battle that led to the cancellation of the 2004/05 season the NHL Players’ Association hired former MLBPA chief Donald Fehr in the hopes they would not get hurt as much as they did during the loss season. However, the battle lines were already being drawn as teams from the start of the new CBA circumvented the salary cap with ridiculous long term deals. In 2010 the league would void a deal between the New Jersey Devils and Ilya Kovalchuk, handing the Devils unprecedented sanctions including the loss of draft picks. The Devils and Kovalchuk eventually would work out a deal, but the first shot in the next labor battle had been fired by Gary Bettman.

In 2011, the NHL returned to Winnipeg, as the Atlanta Thrashers unable to find local ownership in Atlanta, were sold to a group whose goal was to bring back the Jets. Originally the group tried to buy the Phoenix Coyotes, who had been the previous Jets before moving to the desert. However, Commissioner Gary Bettman who controlled the Coyotes became personally involved in keeping the team in Arizona, at the cost of the health of the league. The Coyotes saga would become another embarrassment for the league, and Gary Bettman as the City of Glendale in suburban Phoenix began losing millions to keep the team put. This created great tension for Glendale City Council and the league itself. While the Coyotes were a success on the ice they struggled to draw fans, being among the worst teams in attendance despite making the Western Conference Finals in 2012.

With no deal in place, Gary Bettman locked the players out for the third time in 20 years a Commissioner. The battle would drag on throughout the fall, as Bettman demanded players already signed to long term deals give up their money. The Player’s Association was more interested in getting back on the ice, as they made several concessions from the start. However, Bettman looked to destroy the players like he did eight years earlier, and seemed to have little regard for the season or the sport as he continued hardball tactics cancelling the popular Winter Classic and the All-Star Game. The season itself appeared to be slipping away as the lockout stretched pass the Holidays and into the New Year. With a league deadline approaching a deal would finally be reached with the help of mediator Scot L. Beckenbaugh, from the American Labor Relations board. Much like 1995 a 48 game schedule was put together. While half the season was destroyed the deal assured the league’s main event the Stanley Cup Playoffs would go on without a hitch.

After the deal the owners clearly won the battle, getting the players to give up flexibility in signing deals which included limits to the length of contracts, while teams gained the ability to get salary cap relief on bad contracts, as the league got its much needed 50-50 revenue split. The players in exchange would get a much needed better pension plan, but most important a season and postseason would be played.

After the lockout Gary Bettman continued to be the most unpopular figure in the sport of hockey as he began his 21st season as Commissioner, despite perhaps being the worst commissioner in the history of the four major professional sports leagues.

©MMXX Tank Productions. This site is not affiliated with the National Hockey League. This site is maintained for research purposes only. Page created on February 14, 2004. Last updated on April 2, 2020 at 11:30 pm ET.