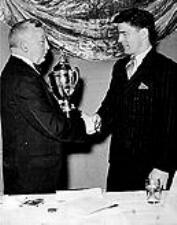 Profile: Born in Bristol, England, in 1877, Frank Calder immigrated to Canada in the early 1900s to teach at a private school in Montreal. After a few years in the classroom, he switched careers to become a sportswriter with the Montreal Witness and later became sports editor of the Montreal Herald.

As a young man, Calder was involved in soccer, rugby, golf, handball and cricket. He became one of the founders of the Montreal school rugby league and served as secretary of the Montreal and district football league. Calder possessed knowledge of sports and a direct and insightful way of speaking. Former Montreal Canadiens owner George Kennedy was so impressed with Calder’s forthright style that he helped facilitate his election to the position of secretary of the National Hockey Association, the forerunner to the NHL. When the NHA folded and the National Hockey League was formed in 1917, Calder was the overwhelming choice for the new league’s first president. Over the next 25 years, his vision and initiative were vital components in the success of the new league.

Almost immediately after assuming his new position, Calder was ratifying the sale of the Quebec franchise to the Toronto Arena. He later scrutinized a number of franchise applications and transfers, enabling such traditional clubs as the Boston Bruins, New York Rangers, Detroit Red Wings and Chicago Black Hawks to be formed, as the NHL spread into the United States.

Frank Calder helped ensure the survival of the NHL during the two world wars and the Great Depression. The two global conflicts depleted the numbers of available players, while the worldwide economic downturn caused several franchises to cease operations or relocate to other cities. A big reason why the league was able to weather these storms was the proactive involvement of Calder. He made a point of attending as many games as possible to monitor the state of the league on the ice and in the community. If he felt the actions or policies of the various team governors weren’t in the best interests of the NHL, he would not hesitate to confront them. Calder, felt the welfare of the players, and their families was important as he was the driving force behind the Ace Bailey and Howie Morenz charity games, demonstrating his sincere concern for the players in the league and their families.

By 1943, Calder’s dedication to the job had caused his health to deteriorate. He was honored during the NHL’s 25th anniversary celebrations, but Calder was overwrought from trying to maintain the survival of the league in the face of World War II. The strain of trying to balance the demands of the game with the needs of the military caused him to collapse at a league meeting. A plan was made to grant Calder a much-deserved rest and have Mervyn “Red” Dutton temporarily assume his responsibilities. Unfortunately, Calder passed away at the age of 65 the day after the motion was passed, as he literally gave his life in the service of the National Hockey League.

Since 1933, Calder had shown his support for hockey with a trophy he purchased and awarded annually to the NHL’s top rookie. Following his death in 1943, it was established as a permanent award and renamed the Calder Memorial Trophy. Another trophy, the Calder Cup, is presented annually to the American Hockey League championship team. Frank Calder was elected to the Hockey Hall of Fame in the Builders category in 1947.

©MVIII Tank Productions. This site is not affiliated with the National Hockey League. This site is maintained for research purposes only. Page created on February 14, 2004. Last updated on January 28, 2008 at 11:50 pm ET.