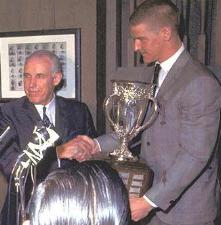 Profile: Few individuals had as significant an influence on professional hockey as former NHL President Clarence S. Campbell. He demonstrated unshakeable faith in his principles while moving with the times when necessary. Campbell presided over the NHL during its most dramatic period of change while going down in history as one of the key sports administrators of the 20th Century.

Born in Fleming, Saskatchewan in 1905, Campbell was an outstanding student and avid sportsman in his youth. In 1924 he graduated from the University of Alberta with a degree in law and arts and earned a Rhodes Scholarship to Oxford University in the United Kingdom. During this period he studied refereeing and worked several hockey and lacrosse matches in Europe.

He returned to Canada after six years at Oxford when the country was in the throngs of the Great Depression. He took a low paying job with an Edmonton law firm and officiated for the Canadian Amateur Hockey Association (CAHA).

Clarence Campbell’s proficiency as a referee attracted NHL officials and he was hired by NHL president Frank Calder at the start of the 1936 season. He quickly established himself as one of the better referees in the league. By the spring of 1937, he was assigned to the Stanley Cup semifinals between the Red Wings and Canadiens. He was the referee the night Howie Morenz’s career came to an end as a result of a broken leg on January 28, 1937.

Campbell enlisted as a private in the Canadian Army in 1940 but quickly rose through the ranks until he ended up commanding the 4th Armored Division. In 1945 he was promoted to the rank of lieutenant colonel. In the aftermath of the war he was appointed the prosecution lawyer for the Canadian War Crimes Commission at the Nuremberg trial of Nazi Kurt Meyer, convicted of executing innocent Canadian prisoners-of-war. Campbell was awarded the Order of the British Empire and made King’s Counsel.

When he returned to North America in 1946, Clarence Campbell was offered the job of assistant to NHL president Mervyn “Red” Dutton. A few months later, at the NHL’s semi-annual meetings in Montreal, Dutton resigned and recommended Campbell as his successor.

Within the first few years of his tenure, Campbell increased the number of NHL regular season games from 50 to 70 and started the NHL All-Star Game. Most importantly he initiated the breakthrough NHL Pension Plan with contributions from the players and the league.

In response to the difficulties faced by the Chicago Black Hawks and Boston Bruins on the ice and at the gate in the early 1950s, Campbell started the Inter-League Draft. This allowed the weaker teams to access the young talent hoarded by the richer clubs, especially Toronto and Montreal. In 1955 he showed unflappable leadership by suspending Montreal icon Maurice Richard then refusing to shy away from attending a game at the Montreal Forum. The Richard Riot was well documented but Campbell’s leadership on behalf of the league in the face of a hostile crowd was less appreciated.

Clarence Campbell oversaw the advent of the NHL’s expansion era. Between 1967 and 1975 the league tripled in size and its popularity was more widespread in North America than in any previous period. He met the challenge of the World Hockey Association head on and refused to allow players not under contract to NHL teams to participate in the 1972 Summit Series between Canada and the USSR. The most notable exclusion under this corollary was former Chicago star Bobby Hull.

When Campbell, who was elected into the Hockey Hall of Fame in 1966, stepped down as NHL president in 1977, one of the most significant epochs in NHL history came to an end. The league had already honored him by naming one of the two league conferences and the Clarence S. Campbell Bowl after him. His 31-year reign stood as the yardstick against which all succeeded NHL leaders would be measured.