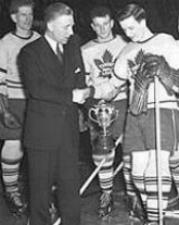 Profile: Mervyn “Red” Dutton was educated at St. John’s College in Winnipeg but left school to join Princess Patricia’s Light Infantry, enlisting in 1915. In April 1917 he took a shrapnel blast to the right leg that was so bad that doctors considered amputation. They delayed, and he recovered full use of his leg. Dutton was discharged from the service in 1919 and upon returning home to Winnipeg he strengthened his leg by playing in seven local hockey leagues during the 1919-20 season.

In 1920, after a failed attempt to enter business as a subcontractor, he turned to professional hockey and accepted $2,500 to play for Calgary of the Big Four Hockey League. He went on to become a two-time Western Canada Hockey League first team all-star and played in the NHL’s Ace Bailey Benefit Game in 1934. He once said of himself, “I wasn’t a good hockey player, but I was a good competitor.” Red Dutton would go on to be inducted into the Hall of Fame for his playing NHL career with the Montreal Maroons and New York Americans

After retiring Dutton was appointed manager/coach of the New York Americans in 1936. The team moved to Brooklyn in 1941 and he personally arranged $7 million in financing for the construction of a new arena there.

His plans for Brooklyn, however, were never realized, as the start of World War II cancelled the plans of an arena in Brooklyn, which in turn forced the Americans to cease operations following the 1941/42 season.

In 1943 Red Dutton agreed to serve as president of the NHL after the sudden death of Frank Calder. Dutton was promised by the league’s Board of Governors that after the war he would be given an NHL franchise to re-establish hockey in Brooklyn. As president he stated that he could see the day when the six-team league expanded to a fifteen-team circuit with three divisions. The NHL Board of Governors were not amused with such futuristic, far-fetched comments.

Once the war ended, Dutton made inquires about his franchise but the NHL Governors reneged on their offer. Dutton resigned the presidency, but only after he persuaded them to accept Clarence Campbell as his successor, in 1946. He returned to the hockey world briefly as a judge and dispute settler for the Western Canada Junior Hockey League but business interests outside of hockey kept him busy in the last half of his life.

Dutton was also a trustee for the Stanley Cup though he did not attend an NHL game from the time he left the presidency until he performed the official face-off prior to the Calgary Flames’ first home game on October 9, 1980. He was recognized for his outstanding service to hockey in the United States when he was posthumously awarded the Lester Patrick Trophy in 1993.