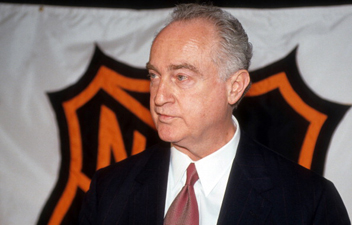 Profile: Gilbert Stein was born and raised in Philadelphia, where he attended Temple University and received a law degree from Boston University in 1952. After passing the bar he worked for the City of Philadelphia in several roles, including deputy district attorney, executive director of the Philadelphia Housing Authority, and regional director of the Pennsylvania Labor Relations Board. Stein then joined the law firm of Blank Rome Comisky & McCauley in Philadelphia. While there, he acted on behalf of the Philadelphia Flyers, who hired him as executive vice-president and chief operating officer in 1976. He was also the first president of the Flyers’ minor league affiliate, the Maine Mariners.

After a year working for the Flyers, Gil Stein joined the league office where he served as vice-president and general counsel for 15 years. On June 22, 1992, Stein was announced as the new president of the league and formally took the position on October 1, succeeding John Ziegler, who was forced out by the owners, who were not happy with the new Collective Bargaining Agreement Ziegler made to save the 1992 Playoffs. Stein’s appointment was to be on an interim basis only, as the league hired an executive search firm to help find a new commissioner at the same time that Stein’s appointment was announced. However, Stein openly campaigned to keep the position as the league’s top executive and greatly expanded the visibility of the president’s office during his term.

One of his first actions after becoming president was to oust long-serving vice-president Brian O’Neill and take over responsibility for league discipline, which O’Neill had previously overseen. Stein implemented a policy of suspending players on non-game days. He also encouraged players to play without their helmets. To help grow support for the NHL in Europe, Stein supported the use of NHL players at the 1994 Winter Olympics in Lillehammer, Norway, but ran into opposition from owners, who did not want to stop the season for three weeks.

Before the end of 1992, the NHL governors had selected Gary Bettman to become the league’s first commissioner, starting on February 1, 1993. Stein had been a finalist for the job, but bowed out when it became clear that most team owners supported Bettman. When Stein’s term ended on July 1, 1993, the remaining duties of the president were given to the commissioner. Stein then served as advisor to the commissioner for three months, before leaving the league in September.

The final months of Gil Stein’s Presidency were marked by embarrassing scandals, as he had the audacity to put himself in the Hockey Hall of Fame. It caused uproar in the media, and within days NHL commissioner Bettman ordered an investigation into the induction process. In August 1993, the NHL counsel appointed by Bettman issued a report finding that Stein had “improperly manipulated the process of nomination and election to the Hall to assure his election misusing and abusing the governance process of the Hall of Fame and the perquisites of his office.” Among the issues were, the majority of the Hall’s board were NHL appointees, and Stein had the rules changed so that builders could be elected with a simple majority of votes from the board instead of the traditional 75 percent, two weeks before the Hall of Fame’s annual meeting, Stein replaced several members of the board, a quarter of the board then consisted of NHL employees who worked under Stein, secret ballots were replaced with a show of hands so everyone would know who voted for and against all the nominees.

At the same time he was manipulating his own enshrinement in the Hall of Fame, he was blocking the nomination of former league vice-president Brian O’Neill. Stein’s enshrinement to the Hall of Fame would be removed, as he left the league in disgrace, a year later O’Neill would get into the Hall of Fame. A few years later Stein would write a book about the incident as he went on to serve an adjunct faculty member of Villanova University’s School of Law in Philadelphia.