1979/80: Publicly owned since 1974, the Jets are required to be purchased by a private investor upon joining the NHL as a group led by Barry Shenkarow purchases the team from Jets fans who proudly paid $25 a share to buy a piece of the organization. After losing their first two games on the road, the Jets beat the Colorado Rockies 4-2 in their first NHL home game at the newly renovated Winnipeg Arena. The team that joined the NHL is a far cry from the one that won three of the last four WHA titles as they were only allowed to keep three players. The rest were put into a dispersal draft, as they finished in fifth place in the Smythe Division with a record of 20-49-11 missing the playoffs.

1980/81: In their second NHL season, the Jets continued to struggle posting a miserable record of 9-57-14, which was 24 points worse than any other team in the NHL.

1981/82: Hoping to turn the page from their miserable nine-win season, the Jets sign Dale Hawerchuk, the top overall pick in the 1981 draft in a public ceremony at Portage and Main. Hawerchuk would prove to be just what the Jets needed as he topped the 100-point mark while leading the Jets in goals and assists to claim the Calder Trophy as the league’s top rookie. Powered by Hawerchuk’s spectacular rookie season, the Jets would land in second place in the Norris Division with a record of 33-33-14. However, in the playoffs, the Jets would come back to reality as they are beaten by the St. Louis Blues in four games.

1982/83: Back in the Smythe Division, the Jets would take a step backward, finishing in fourth place with a less than stellar record of 33-39-8. In the playoffs, the Jets would make a quick exit, as the Edmonton Oilers sweep them in three straight games.

1983/84: Despite another losing season at 31-38-11, the Jets make it into the playoffs by finishing in fourth place. However, in the playoffs would come another cold dose of reality as the Jets are swept in three straight games by the Edmonton Oilers, allowing 18 goals along the way.

1984/85: With Dale Hawerchuk scoring 50 goals for the first time in his career and Paul MacLean topping the 100-point mark, the Jets posted their first winning season since joining the NHL finishing in second place with a solid 43-27-10 record. With the playoffs comes the birth of a new tradition as fans were urged to wear white while attending Game 1 on April 10th. Those not in white stood up like a sour thumb as the Jets rallied to beat the Calgary Flames 5-4 in overtime on a goal by Brian Mullen. After winning Game 2 at home, the Jets playoff hopes took server damage in Game 3 loss at Calgary as Dale Hawerchuk is lost for the remainder of the playoffs on a cross-check by Jamie Macoun. The Jets would go on to douse the Flames in four games, but in the second round, they would be swept by the Edmonton Oilers in four straight games.

1985/86: Despite a horrible 26-47-7 record, the Jets would make the playoffs by finishing in third place in the front-loaded Smythe Division. In the playoffs, reality would hit hard as the Jets are swept in three straight games by the Calgary Flames.

1986/87: Led by Dale Hawerchuk, who notches 100 points, the Jets rebound off their poor season to finish in third place with a record of 40-32-8. In the playoffs, the Jets would spoil a much anticipated Smythe Division final between the Calgary Flames and Edmonton Oilers by upsetting the Flames in six games. However, once again, the Jets would be swept by the Edmonton Oilers losing their division final series in four straight games.

1987/88: Dale Hawerchuk continues to be the best player on the Jets with a team-high 121 points highlighted by 77 assists, as the Jets finish in third place again with a record of 33-36-11. In the playoffs, the Jets would face the Edmonton Oilers again dropping the first two games on the road to extend their postseason losing streak to the Oilers to 16 games. In Game 3, in front of a crowd wearing all white at the Winnipeg Arena, the Jets would finally end the losing streak with a 6-4 win. However, the Oilers would go on and take the series in five games.

1988/89: After another first-round playoff exit the Jets would make several changes trading away players like Mario Marois and Ray Neufeld while changing their General Manager the Jets would sputter their way all season missing the playoffs for the first time in eight years with a record of 26-42-12, finishing last in the Smythe Division.

1989/90: Under new Coach Bob Murdoch the Jets would rebound off their last-place season by finishing in third place with a record of 37-32-11. Facing the Edmonton Oilers again in the playoffs, the Jets appeared to have finally got the upper hand as they jumped out to a 3-1 series lead. However, the Oilers would rally to win the next three games and end the Jets season for the sixth time in eight years.

1990/91: On draft day, Dale Hawerchuk is traded to the Buffalo Sabres as part of a four-player deal that also saw the exchange of first-round draft choices. In exchange, the Jets receive Phil Housley and also used the draft pick to select Keith Tkachuk. The trade of Hawerchuk would leave a massive void as the Jets landed in last place again with a terrible 26-43-11 record.

1991/92: Led by Phil Housley, the Jets bounce back after missing the playoffs to finish in fourth place with a record of 33-32-15. Facing the Smythe Division winning Vancouver Canucks, the Jets appeared to be on the verge of an upset by taking a 3-1 series lead. However, the Jets would be outscored 21-5 in the final three games as they blew a 3-1 lead for the second time in three years.

1992/93: Teemu Selanne has a record-breaking rookie season as he smashes the record for goals and points by a rookie scoring 76 goals and 132 points to break the old records held by Mike Bossy by 22 and 23 respectively to capture the Calder Trophy. With Selanne leading the team, the Jets would finish in fourth place with a 40-37-7 record. However, it would be another first-round departure for the Jests who were beaten by the Vancouver Canucks in six games.

1993/94: Injuries limit Teemu Selanne to just 51 games as the Jets now playing the Central Division, which was formerly known as the Norris Division crash into to last place posting a disappointing record of 24-51-9.

1994/95: Amidst a four-month lockout that cuts the NHL season in half word begins to spread that the Jets’ future in Winnipeg is in jeopardy. Despite solid seasons from Alexei Zhamnov, Keith Tkachuk, and Teemu Selanne, the Jets again finish in last place with a record of 16-25-7. Following the season, efforts to save the Jets would be thrown into overdrive after the Manitoba Entertainment Complex announces they would not exercise their option to purchase the Jets and keep the team in Winnipeg. After the MEC fell apart and a retirement ceremony for the Jets logo and Thomas Steen’s #25 were held, Operation Grassroots was started to persuade government and local buyers to construct a new arena and keep the Jets in Winnipeg. On May 16th, 35,000 people attend a rally to raise money in the most massive rally in Winnipeg in 50 years. Approximately $250,000 is raised at this rally from the citizens of Winnipeg. A day later, another $250,000 would be raised at “Hockey Social” at the Winnipeg Convention Centre. Meanwhile, a deal to sell the team to an ownership group in Minnesota would fall apart, as owner Barry Shenkarow announces the team will stay in Winnipeg at least one more season. However, efforts to keep them in Winnipeg beyond a season were hampered when the Winnipeg City Council voted to deny charitable tax status on donations to The Spirit of Manitoba formerly known as the MEC. They were raising money to save the team. Although the decision would be overturned, the Spirit of Manitoba would fail to raise the necessary capital to proceed with the purchase of the Winnipeg Jets, ending all hopes the team would stay in Winnipeg beyond one year, as ownership outside Winnipeg was sought.

1995/96: “By the time I get to Phoenix she’ll be rising, she’ll find the note I left hangin’ on her door she’ll laugh when she reads the part that says I’m leavin’ Cause I’ve left that girl so many times before.” Words sung by Glenn Campbell must have been a punch in the heart to the fans of the Jets as they entered their final lame-duck season in Winnipeg, as a group headed by Richard Burke and Steven Gluckstern announces they would be moving the Jets to Phoenix following the season. During their final season, the Jets would trade Teemu Selanne to the Mighty Duck of Anaheim along with Marc Chouinard for Oleg Tverdovsky and Chad Kilger in a trade some in Winnipeg thought was to spite the new ownership. Despite the puzzling trade, the Jets would beat out the Ducks by 1 point to make the final playoff spot with a record of 36-40-6. In their last regular-season home game on April 12th, the Jets would beat the Los Angeles Kings as Keith Tkachuk notches his 50th goal. However, in a tradition, the Jets would be knocked off in the first-round loss to the Detroit Red Wings in 6 games, as their season ends on April 28th in front of a sold-out crowd at the Winnipeg Arena wearing all white to see the Jets fall 4-1, in a day where black may have been a more appropriate color.

1996-2011: After the Jets landed in Phoenix and became the Coyotes, Winnipeg would become the home of the IHL’s Manitoba Moose. A new arena known as the True North Centre was built for the Moose who now play in the AHL and are top minor league affiliate of the Vancouver Canucks, with hopes of one day luring back the NHL as with a new Salary Cap and revenue sharing won by the owners during a bitter lockout that canceled the entire 2004/05 season has given fans in Winnipeg renewed hope, as it has eliminated many of the financial difficulties which caused the Jets departure. In 2010 an impossible dream began to fill Winnipeg fans’ hearts, as the Coyotes struggles in Arizona had the league taking over its finances while a new owner was sought. True North Sports and Entertainment, the ownership group attempting to purchase the Coyotes, gave up the pursuit of former Jets in the desert and looked to bring the AtlantaThrashers north in 2011. This time they would be successful, and the NHL would return for the 2011/12 season. After pressure from fans, the new team would be called the Winnipeg Jets. 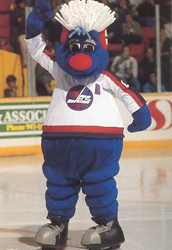 ©MMXVII Tank Productions. Stats researched by Frank Fleming, all information, and team names are property of the National Hockey League. This site is not affiliated with the Winnipeg Jets or the NHL. This site is maintained for research purposes only.
All logos used on this page were from Chris Creamer’s Sports Logos Page.
Page created on Page created on May 8, 2003. Last updated on April 1, 2018 at 10:15 pm.