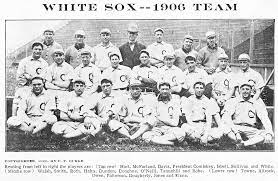 The Chicago White Sox, nicknamed “The Hitless Wonders,” win the World Series beating the Chicago Cubs in six games. The White Sox win the finale at South Side Park 8-3, completing a monumental upset. The Cubs had set a record with 116 wins, posting a record of 116-36. Meanwhile, the White Sox won the American League with a record of 93-58, despite a league-worst .230 average. The White Sox did not hit in the World Series either, batting .198, but the Cubs were just as bad, hitting .196.